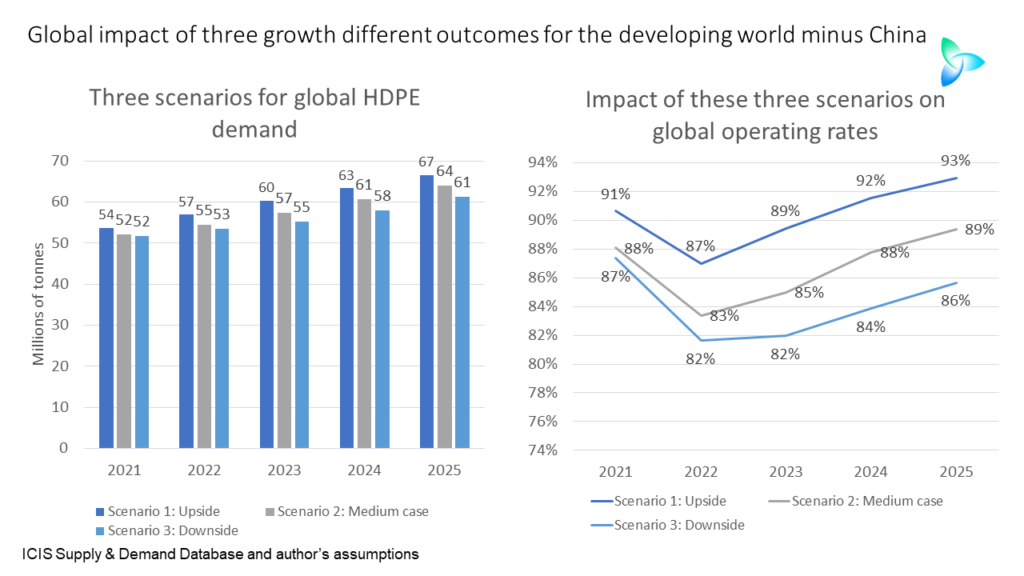 MANY OF US are very familiar with the feeling of sitting at home, waiting to hear whether we’ve got the job we really, really need to stay financially above water.

So is the case with the developing world as it sits on the side lines of the G7 meeting in Cornwall, the UK, waiting to discover whether it will be given the support it needs to become adequately vaccinated.  The meeting starts today (11 June) and finishes on 13 June.

The G7 only comprises the US, UK, France, Germany, Italy, Japan and Canada, although Australia, India, South Africa and South Korea are attending this week’s meeting as guests.

The rest of the developing world should surely not have been left out of the discussions. To have only invited two developing countries, India and South Africa, doesn’t make sense.

The most glaring absentee is obviously China as it is the world’s second-biggest economy. What about the rest of Africa, South & Central America and the poorer countries in the Asia and Pacific region? I believe that the format of the G7 needs to be revised.

But what is encouraging is that 230 prominent figures, including more than 100 former prime minister and presidents, have sent a letter to the G7, asking it to pay two-thirds of the $66bn needed to vaccinate low-income countries against the pandemic.

“For the G7 to pay is not charity, it is self-protection to stop the disease spreading, mutating and returning to threaten all of us,” said former British Prime Minister, Gordon Brown, who signed the letter.

Hear, hear. We must avoid “vaccination nationalism” that risks splitting the world into two regions – one enjoying economic recovery and the other struggling with continued declined. And as the former British PM says, viruses don’t respect borders. As we are seeing with the Delta strain of coronavirus, it is impossible to stop variants spreading globally.

Mr Brown said that the two-thirds coverage of vaccination costs would cost each person in the UK just 30 British pence per week and would boost the global economy by $9trn.

Sharing vaccines would also help. To this end, the great news that emerged on the eve of the summit was that the G7 had pledged to provide 1bn doses of vaccines to poorer countries as part of a plan “to vaccinate the world by the end of 2022”.

The move is designed to head off criticism that the rich world has been hoarding vaccines. Canada, the UK, the EU, the US and Japan had collectively procured 5.3bn doses of vaccines despite a collective population of just over 1bn, said the Global Health Innovation Center at Duke University in the US.

But funding is also essential as it costs three times more to deliver and administer a dose of a vaccine than to buy the dose. This is a major barrier for poorer countries that often have inadequate healthcare systems.

Hence the need for the G7 to meet two thirds of the $66bn. The rest could come from giving the developing world priority in accessing IMF funds from its special drawing rights system. The world is on the verge of creating $650bn worth of new drawing rights – a type of emergency funding.

The great divide in the cost of government funding has widened since the pandemic began. It has long been the case that public borrowing is cheaper in developed countries than in developing countries.

But S&P data, quoted by the Financial Times, show that since the pandemic began, refinancing costs for 15 of the 18 largest developed economies have fallen below their average cost of borrowing by more than a percentage point.

Developing countries such as Brazil are also being forced to issue bonds with shorter-than-usual repayment dates. The bond issuances are exposed to the risk of global interest rates increasing over the next few months.

The divide in the cost of financing has widened because of the diverging economic prospects of the developed versus the developing world. This circles back to the varying speeds of vaccination programmes.

“Ninety four percent of high-income countries will regain pre-recession Gross Domestic Product per head within two years. This would be the highest percentage share in so brief a period after any recession since the Second World War,” wrote Martin Wolf in this FT article. He was quoting data from the World Bank’s June Global Economic Prospects report.

But the proportion of emerging and developing countries expected to achieve the same outcome was 40%, again according to the World Bank, Wolf added. This would be the lowest percentage following any other post-Second World War recession.

The World Bank study said that half of all low-income countries were in debt distress.

“The pandemic not only reversed gains in global poverty reduction for the first time in a generation but also deepened the challenges of food insecurity and rising food prices for many millions of people,” said David Malpass, president of the World Bank.

The developing world and the threat from the Fed

I have had to eat humble pie this week. Only three weeks ago, I had thought that today’s strong inflationary pressures were only temporary and therefore not a big threat But I wrote on Tuesday this week that I might have been wrong.

What I had thought where temporary supply chain disruptions now appear to be medium or even long-term challenges. The disruptions have been caused by the pandemic.

The global semiconductor shortage is forecast to last at least another year and container freight rates have started to increase again. Labour is in tight supply in the US, China and elsewhere and other shortages include in petrochemicals, wood and metal.

Imagine a giant lake. Someone has set a bomb off in the middle of the lake and the waves and ripples from the explosion are still spreading out in very slow motion. We have no idea about the location or size of the future ripples and how many there will be.

Take as an example of one wave this ICIS news article on rising US logistics costs. US truck drivers were in short supply before the pandemic. The shortage has worsened since coronavirus because at the height of lockdowns in the States driving schools were shut. Fewer newly qualified drivers are available to help ease the shortage.

In China, factory labour is hard to come by because people can earn more money as internet delivery drivers. Pay rates for drivers have gone up because of the rise in internet sales resulting from the pandemic. Even though lockdowns are long over in China, consumer habits seem to have permanently shifted in favour of online buying.

Might we see the same trend play out in the West? Some 14bn of financing has poured into online food-delivery start-up companies. The convenience of the new services might lead to a long-term shift in Western spending habits, thereby pulling labour away from other sectors.

The US Federal Reserve faces the dilemma that it might wait too long to raise interest rates as inflation runs out of control. It may then have to aggressively raise rates, triggering a new global recession. Or it could be too quick to pull the rate-rise trigger and produce the same effect of a new recession. Hopefully, it will get the timing and extent of rate rises exactly right.

A vicious circle might develop of more funding flowing to developed countries and less and less to the developing countries. This would further widen the cost of financing between the two regions, along with their relative growth prospects, and so on and so on.

The implications for global HDPE demand 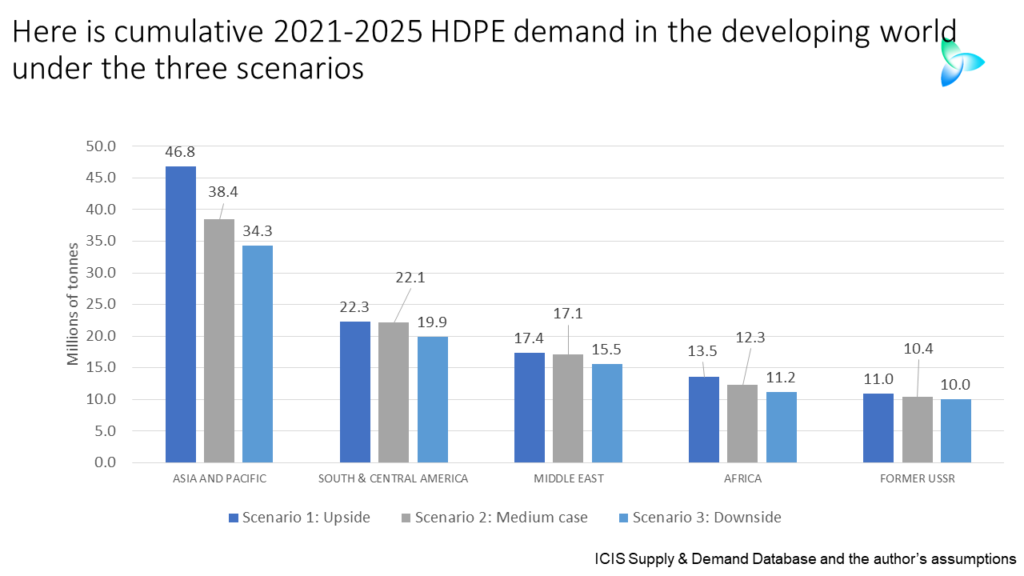 I really cannot see any good immediate outcomes here. Even if this week’s G7 meeting were to reach a firm deal on funding two-thirds of the developing world’s vaccine requirements, the estimate that less than 2% Africans have received their first jab says it all. With rates low across most of the rest of the developing world, the chances of a big improvement in the vaccination picture by the end of this year seem slim.

And the longer that the developing world remains largely unvaccinated, the greater the risk that new and more virulent strains of coronavirus will develop. The strains would further damage poorer countries while also representing a global risk.

If this were to combine with a Fed rate rise then the developing world would be in deep, deep trouble.

I of course sincerely hope that this is way too pessimistic. But whatever the eventual pattern of events, petrochemicals and other companies must plan for worst-case outcomes. Equally – as scenario planning must be at the core of your business – medium and best-case scenarios should also be prepared.

To this end see the slide at the beginning of this blog post, which again uses data from the excellent ICIS Supply & Demand database. It consists of three scenarios for global high-density polyethylene (HDPE) demand in 2021-2025, based on different growth outcomes for the developing world.

The downside in Scenario 3. Demand would average 4% with cumulative demand at 280m tonnes – 21m tonnes lower than the upside. Operating rates would average just 84%.

(Note that under all three scenarios, I have kept growth rates for the developed world the same. Growth remains healthy across the region in 2021-2025. Clearly, though, weak growth in developing countries would create a knock-on impact on developed countries. For more detailed scenario work, contact me at john.richardson@icis.com. I can then put you in touch with our analytics and consulting teams. Again, please note that these workings are for demonstration purposes only.)

Now look at the slide at the beginning of this section. Here I provide you with the detail, on a cumulative basis, of the different consumption outcomes for the developing world that were used to construct the three global outcomes.

The developing world I define as the Asia and Pacific region – minus the developed economies of Australia, New Zealand and Singapore – the Middle East, South & Central America and the Former Soviet Union.

The developed world plus China includes, of course, China and Australia, Canada, Europe, Japan, Singapore, South Korea, Taiwan, New Zealand and the US.

I have added China to the developed world because it is not exposed to the same funding challenges as the rest of the developing world (and, anyway, one can argue that China’s isn’t really as developing economy anymore). China has also very successfully brought the pandemic under control. It aims to have vaccinated 80% of its population by the end of this year.

Under Scenario 1, developing world demand moves from negative in 2020 to positive this year. 2021-2025 growth averages 5% per year.

If the international community doesn’t respond in the right way, a whole generation of growth in the developing world could be lost because of slow vaccination programmes. The burden on the Fed is, always, very heavy. If it gets its interest rate decisions right, then all we need to worry about is the progress of vaccination programmes.

It is not just economic growth that is under question. As I shall discuss in my post on Monday, if the economic outcomes are bad for the developing world, global agreements during this November’s COP26 climate meeting in Glasgow, the UK, could well be harder to reach. The developing world might have priorities more pressing than cutting greenhouse gas emissions.

All of us hope for good outcomes. As always, though, hope is not a strategy.