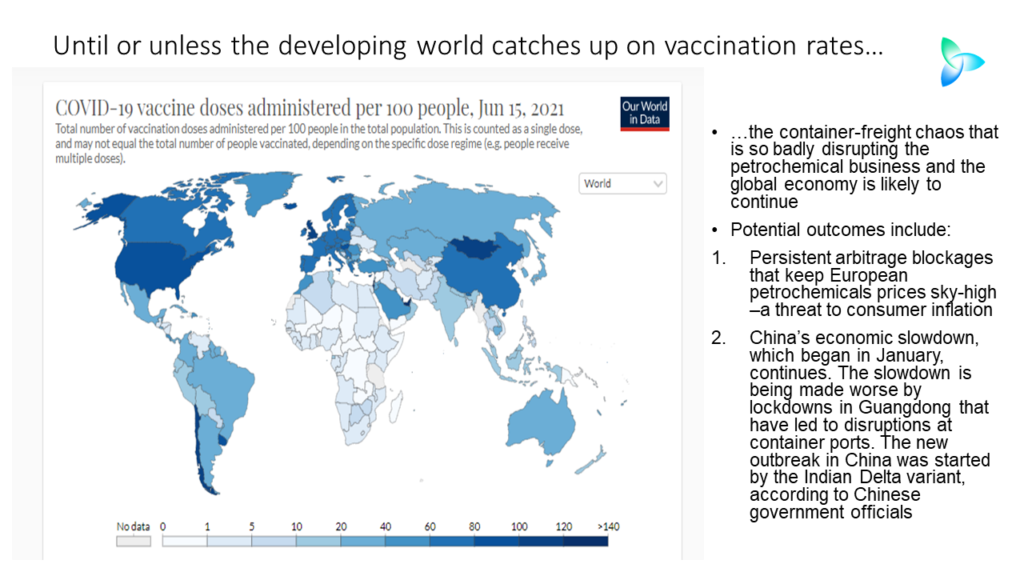 IF YOU WANT to understand when container-freight chaos will fully come to an end, look at the graphic above from Our World in Data, the fantastic free service set up to fight poverty, disease, hunger, pollution and the world’s other ills with the power of numbers.

What you can see is the rolling seven-day average of the number of vaccines administered by each country per 100 people as of 15 June. Most of the developing world is way behind the developed world. Just look at Africa.

Until or perhaps unless the developing world catches up, severe container freight problems look set to continue for reasons as I shall detail in this post.

Tom wrote: “Until lockdown measures ease comprehensively enough and long enough to allow the lengthy process of supply chains to ease back to normal footing, the disruption is likely to continue. With the timeline for vaccine rollouts in many emerging economies, that could be some time yet.”

This applies to the container-freight business. In normal times, there is a complex and very fine balance of enough containers in the right places at the right times. As countries have gone in and out of lockdowns, this balance has been repeatedly disrupted in ways that have been impossible to predict.

It doesn’t matter that production of containers has returned to normal after a dip during the height of the pandemic in the developed world plus China. Neither does it matter that container-freight lines are adding more services. What instead counts is that there are still too many containers in the wrong places and at the wrong times.

This helps to explain the chart below, showing the renewed surge in freight rates from mid-May onwards, as a I discussed last week. Getting petrochemicals, polymers and finished goods from Asia to Europe and the Americas has become much more expensive since then. 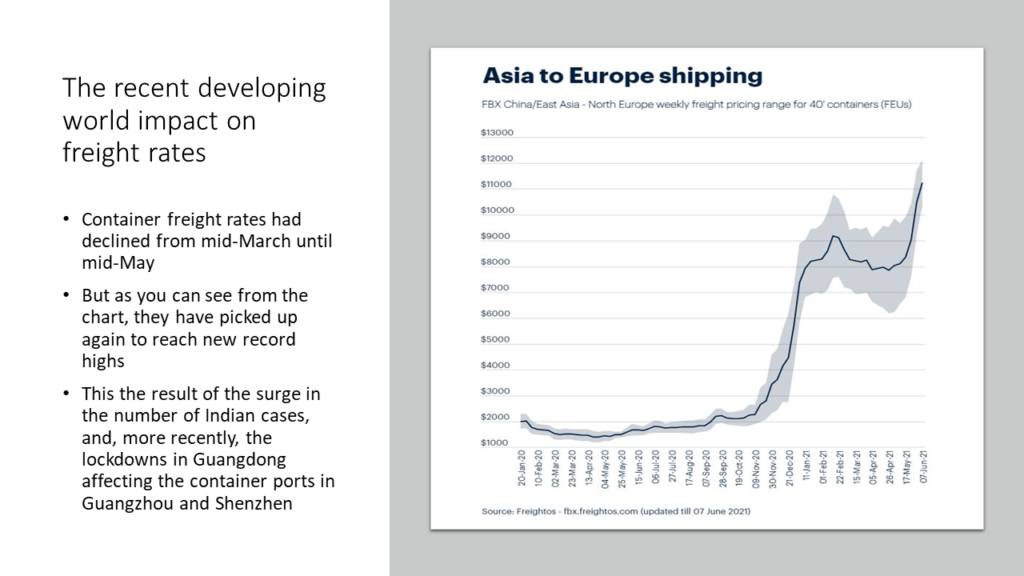 One of the reasons for the renewed increase in freight rates is the surge in cases in India since April. Here is the crux of India’s problem: just 15% of Indians had received at least their first dose as of 15 June, according to Our World in Data.

Recent restrictions at Indian ports have further unbalanced the container business. Some 200,000 of the world’s 1.7m seafarers across all types of vessels are from India. Heavier Indian quarantine restrictions seem likely to have led to labour shortages on some container routes.

The lockdowns in Guangdong, which are disrupting ports in Guangzhou and Shenzhen, are hugely significant because 24% of China’s exports originate from southern China. Southern China is also the destination for 19% of China’s imports, according to Oxford Economics.

The longer the world goes without being adequately vaccinated the greater the risk that new more vaccine-resistant strains will develop.  Because we live in such a highly interconnected world, entirely sealing-off whole countries and regions from one another is impossible.

Continued container-freight chaos: what this means for petrochemicals

I was asked by a client last week how long the weird petrochemical price differentials we have seen between Europe and other regions would continue. My updated chart below gives two snapshots of these differentials – the high polyethylene (PE) and polypropylene (PP) price premiums in Europe compared with China. 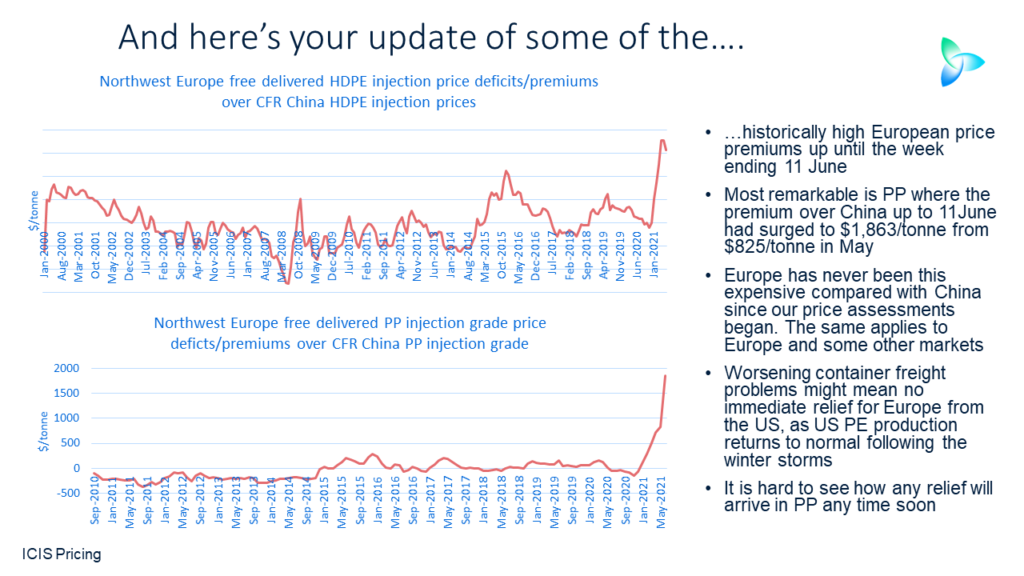 My answer was that as US PE production was gradually returning to normal following the winter storms, bigger volumes of exports would soon resume to Europe – Europe’s biggest source of imported PE. I had earlier been told that there were limited problems with the US-Europe container routes. Now I am not so sure given the deteriorating state of the container business.

What seems clear is that the high price premiums for European PP over other markets will remain for a good while longer. The US is not a major import source for Europe. It instead depends on the Middle East and to a lesser extent Asia for most its imports. Just look at the PP price gap between Europe and China so far in June!

European PE and PP end-use demand was strong during the height of the region’s pandemic for reasons I’ve been detailing since mid-2020. And because coronavirus has reshaped the nature of consumption over the long term, demand has remained strong this year.

But could high PE and PP costs feed through into demand-damaging consumer-price inflation, given that there are also many other inflation pressures from shortages of semi-conductors, wood, tin, metal and labour? In May, Eurozone inflation was higher than the ECB target range for the first time in more than two years.

Globally as well, as I again discussed last week, inflation is becoming a bigger problem. If the US Federal Reserve were to raise interest rates, this would make financing even harder to come by for the developing world. The region is already struggling to afford the cost of borrowing because of slow vaccination rates.

China’s economy was already slowing down before the Guangdong lockdowns. This has been crystal clear from our data for Chinese petrochemicals apparent demand since March – when the January-February data arrived.

Remember that all year-on-year comparisons are invalid because of the low base of early 2020, when the pandemic was at its height in China. The only valid measure which counts is assessing whether the tremendously strong growth momentum of late 2020 has been fully carried over into this year. The answer is clearly “no” because:

The longer Guangdong’s ports remain disrupted – affecting China’s vital export trade – the greater the risk the slowdown will continue. The slowdown could even intensify.

What has also contributed to China’s slowdown is one of the periodic decisions by Beijing to tackle bad debts. New Normal Consulting reports that total social financing, the total level of lending from both state-owned and private banks, fell by 19% on a year-on-year basis in January-May.

On this occasion, a year-on-year comparison is valid because in January-May 2020 China was pumping lots of extra money into the economy to compensate for the pandemic. What the latest lending data tell us is that stimulus has returned to pre-pandemic levels.

The 100th anniversary of the Chinese Communist Party takes place on 1 July this year. If there are any signs that the economy is suffering major stress ahead of and immediately after this key event, we might see the government once again go cold on tackling bad debts.

But the extent to which big domestic stimulus would make up for continued problems in China’s export trade is a moot point.

The export boom was the main reason why China’s economy recovered so rapidly in H2 last year, as domestic growth lagged well behind the rebound in overseas trade. A proper analysis of the data show that local spending growth remained weak in early 2021, relative to before the pandemic.

This brings me on to today’s fourth chart which shows the dramatic rise of China as a driver of global petrochemicals demand since 2000. 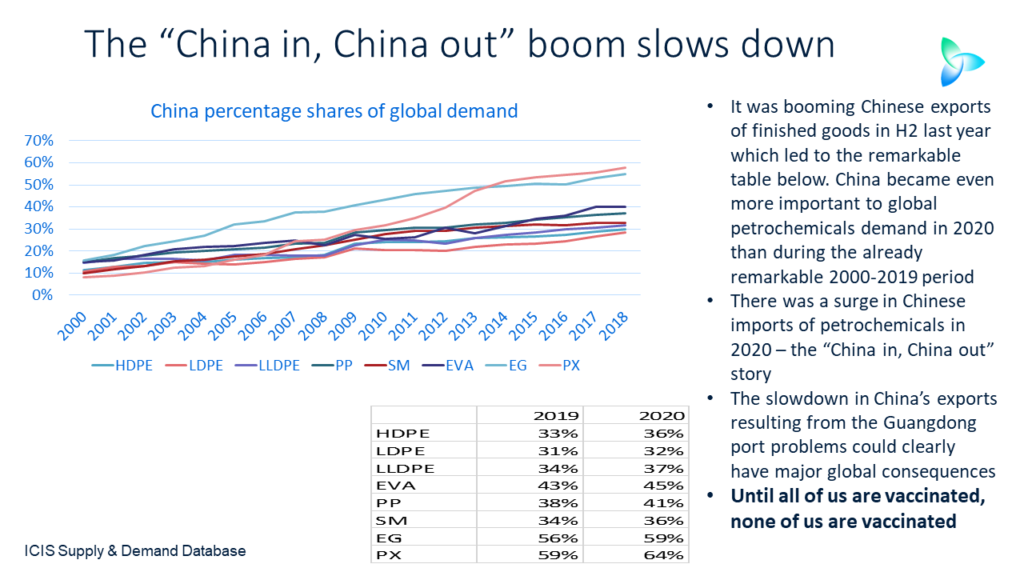 What added further juice to China’s role in driving global demand in 2020 – as the table at the bottom of line chart illustrates – is the “China in, China out” story that I’ve been highlighting since last September.

As China supplied most of the finished goods developed countries needed for their lockdown lifestyles, China’s petrochemical demand and imports soared. Take PP as an example where in 2020 over the previous year, demand rose by 13%. Imports were 27% higher despite a big rise in local capacity.

Ergo the longer China struggles to get its exports to markets, the bigger the global damage to petrochemicals demand.

A defining moral and economic issue

Long-lasting container freight disruptions are obviously not the only outcome of insufficient progress on vaccinations in the developing world.

“Until all of us are vaccinated, none of us are vaccinated,” said a nurse as she gave me my first dose of the Astra Zeneca jab three weeks ago. If only some politicians had the common sense to listen to the nurse and other healthcare professionals who I have heard make this same point.

One politician who has displayed the right attributes is former British Prime Minister, Gordon Brown. Before the G7, he said it would cost just $66bn to fully fund vaccinations in the developing world. This would avoid a further $9trn of damage to the global economy from the pandemic, he added.

After the G7, Brown said that there had been an “unforgivable moral failure when Covid is destroying lives at the rate of one-third of a million every month”. Hear, hear.

The developing world doesn’t just need support on vaccinations. It also needs access to cheaper financing and more investment in basic infrastructure such as roads, bridges, healthcare systems and education.

Back to the subject of vaccinations, As I said earlier, the longer the delay before the developing world is adequately vaccinated, the greater the risk that new more vaccine-resistant strains of the pandemic spread globally. The whole economic apple chart could be turned over, setting back the global recovery.

This is one of the defining moral and economic issues of our age. What can we do as a petrochemicals industry to support the global vaccination drive? What are we already doing?