IRAN and China earlier this month signed a wide-ranging economic and security agreement that has been under negotiation for five years.

The deal involves $400bn of investment in the overall Iranian economy with as much as $280bn of spending on oil, gas and petrochemicals.

Before I crunch the data and demonstrate how this critical geopolitical development could change petrochemicals trade flows, here is your executive summary of the context behind the deal and the potential implications for polyethylene (PE).

I said last July that if all unconfirmed Iranian PE projects were to go to ahead because of new Chinese investments, the country may export a cumulative 75m tonnes of all three grades of PE between 2020 and 2030.

This compares with our base case of 42m tonnes which assumes that none of the unconfirmed projects go ahead.

My focus today is on high-density PE (HDPE) and linear-low density PE (LLDPE) and Iranian exports specifically to China.

Other products are clearly going to be impacted, but it would complicate things to try and cover everything in 1,700 words. I will therefore cover other products in later posts.

Today’s analysis also points to Iran gaining no less than 85% of China’s total LDPE imports in 2025, up from last year’s 21%.

The analysis assumes that Chinese support may not just mean new Iranian plants, but also the ability to run existing Iranian plants at higher rates due to China’s technical support and its guarantee of a market.

I also assume that China will run its local HDPE and LLDPE plants at very high rates while adding more new capacity than is commonly expected.

Geopolitics and the legacy of the Trump era mean China has already taken the decision to become more self-sufficient and build its Belt & Road Initiative (BRI) into a China-focused trading bloc.

The signing of the Iran/China deal earlier this month, which was five years in the making, in my view confirms the direction of travel.

I believe that events are too far progressed for them to be reversed by the US rejoining Iran’s nuclear deal with the West. The US and Iran have agreed to hold unformal talks about this outcome.

Iran is an early target for China’s new strategy given its advanced state of industrialisation compared with the rest of the Middle East, along with the size and youth of its population.

Pricing isn’t really an issue for Iran as the US has so damaged its economy that it is in a state where “anything is better than nothing” – any income is an upside.

China doesn’t just need to always secure raw material imports in the right quantities to achieve its top political and economic objective, which is job security.

The raw materials must also arrive at the right price. Last year, Oilprice.com estimated that China would be able to obtain a total discount of around 32% off purchases of oil, gas and petrochemicals from Iran.

This new deal threatens a shakeout amongst existing exporters to China if the combination of increased Chinese production and Iranian exports cuts the available China market for everyone else.

Straightforward arithmetic suggests that Saudi Arabia, the United Arab Emirates (UAE), South Korea and the Russian Federation would be the biggest losers.

But geopolitics could see US exporters suffering the biggest declines in shipments to China.

You are going nowhere in forecasting petrochemicals markets without considering geopolitical drivers in general along with the other three megatrends – the pandemic, sustainability and demographics.

What must also be understood are fluctuating and complex interactions between the four megatrends.

In this case, we need to consider the geopolitical relationship among the US, Iran and China and how geopolitics are overlaid by the very different demographic profiles of Iran and China. 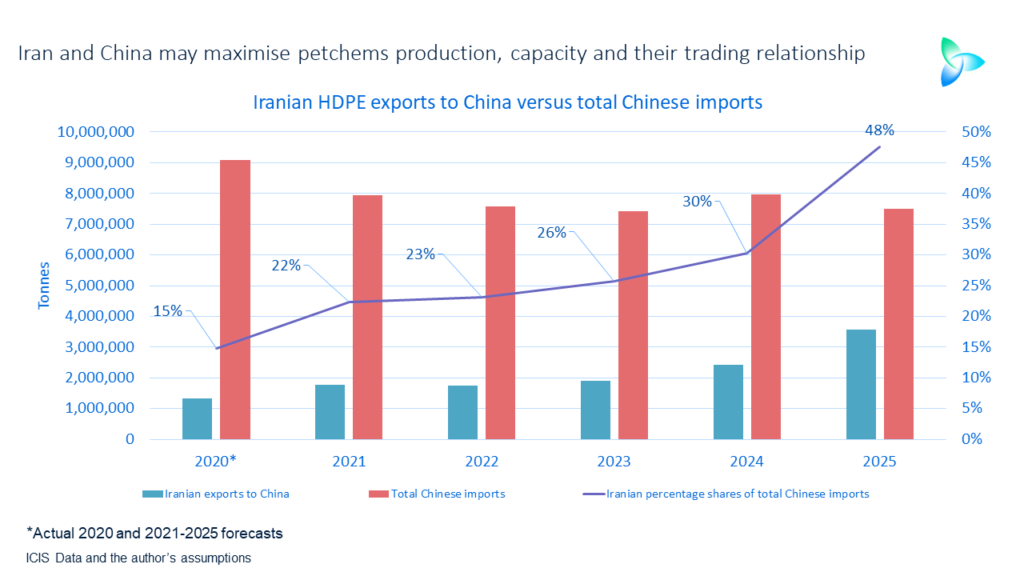 As the headline of the above slide indicates, I see Iran and China maximising their petrochemicals production as their trading relationship becomes closer.

The outcomes in the slide assume that Iran runs its HDPE plants at a 2021-2025 average operating rate of 93%, thanks to Chinese investment. This compares with our base case of 86%.

The chart factors in Iran adding 3.3m tonnes/year of the capacity we have listed as unconfirmed in our ICIS Supply & Demand Database.

Between 2021 and 2025 we list a total of 9.5m tonnes/year of unconfirmed Iranian HDPE capacity, with the first unconfirmed capacity due on-stream in 2023.

This seems to me to be too much new capacity to execute in such a short time, so I assume only 35% gets built – 3.3m tonnes.

Take demand away from production, as Iran is a major net exporter, and you end up with estimates for Iran’s total exports in 2021-2025.

The above scenario factors in Chinese demand growth at an average of 7% in 2021-2025. This strong growth is built on the premise of a robust overall economy. I also assume further rapid expansion in the HDPE pipe, blow and injection-grade end-use markets.

Blow moulding may benefit from stronger pandemic-related demand for bottles used for hygiene products. The support for the injection-grade market could come from further growth in urbanisation and internet sales, including takeaway food.

Take production away from demand (the opposite way around to Iran as China is a major net importer) and you end up with estimates for total Chinese imports in 2021-2025.

The final piece of the jigsaw to produce the numbers on the above chart assumes that 95% of Iranian HDPE exports go to China because of the close relationship. This would compare to 84% in 2019, the last year for which I have the data.

The chart is presented in actual tonnes to make it easier to read in detail. Below I stick to millions of tonnes:

The effect on China’s other top five HDPE trading partners 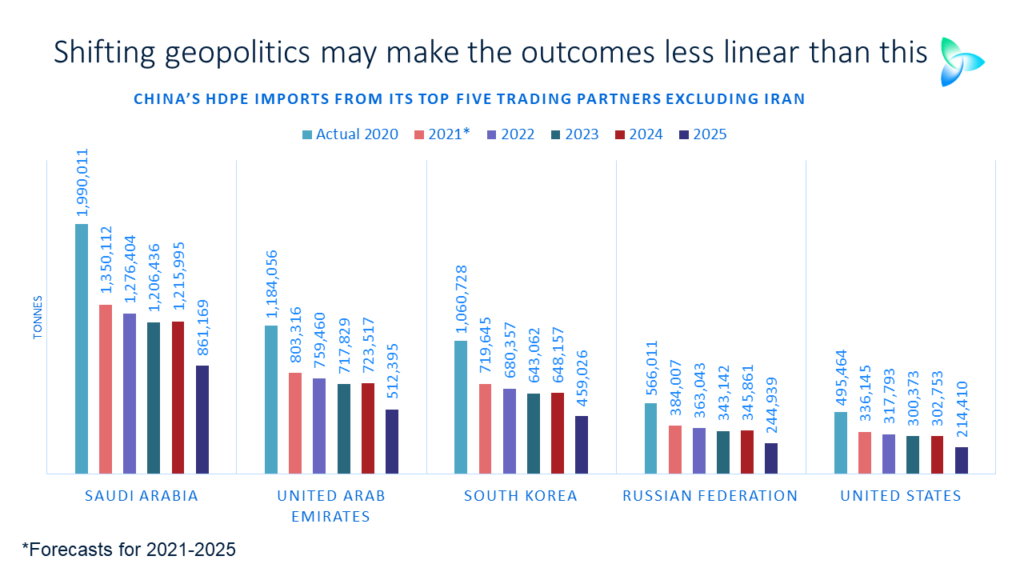 The above chart uses my standard approach of assuming that in future years, China’s HDPE trading partners win the same percentage shares of the total China import market as they did in 2020.

I have subtracted from my estimates of total Chinese exports in 2021-2025 how much I assume will arrive from Iran.

This leaves the rest of the available market to divide among China’s five other top HDPE trading partners minus Iran.

As you can see, I have also included actual 2020 imports in the above chart.

On this basis, Saudi Arabia, the UAE, South Korea and the Russian Federation would see the biggest impact because they fall into the top four of China’s trading partners minus Iran.

But this could be too simplistic. It is possible that China’s geopolitical relationships with the Middle East as a whole, South Korea and the Russian Federation strengthen as the US and China drift further apart.

In such circumstances, Saudi Arabia, the UAE, South Korea and the Russian Federation may win bigger shares of the remaining market at the expense of the US. 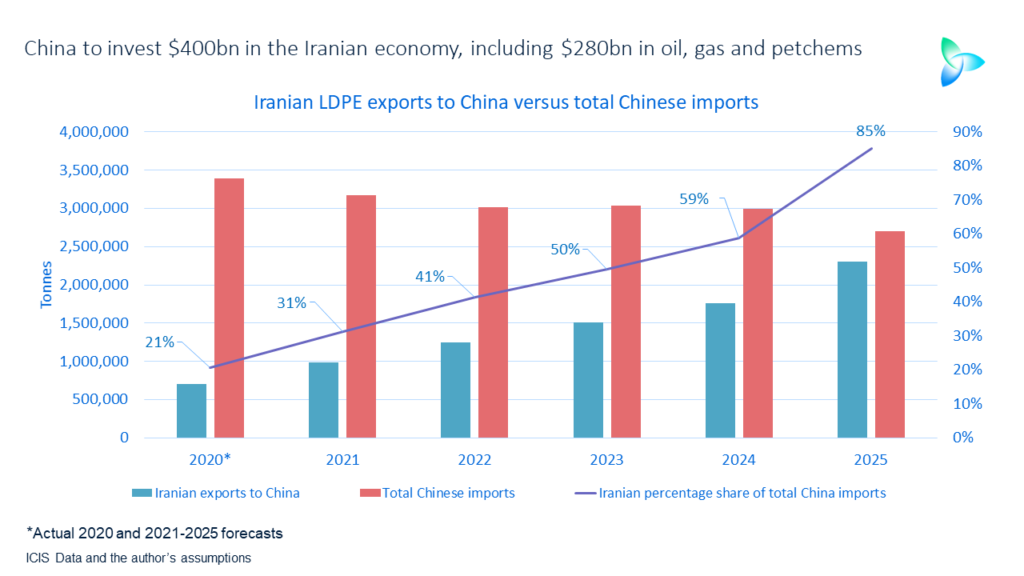 Wow! As you can see from the above chart, the impact on LDPE could be even greater:

Without repeating the details of how the calculations were done – as I obviously used the same approach as for HDPE – the LDPE outcomes are based on the following:

The effect on China’s other top five LDPE trading partners 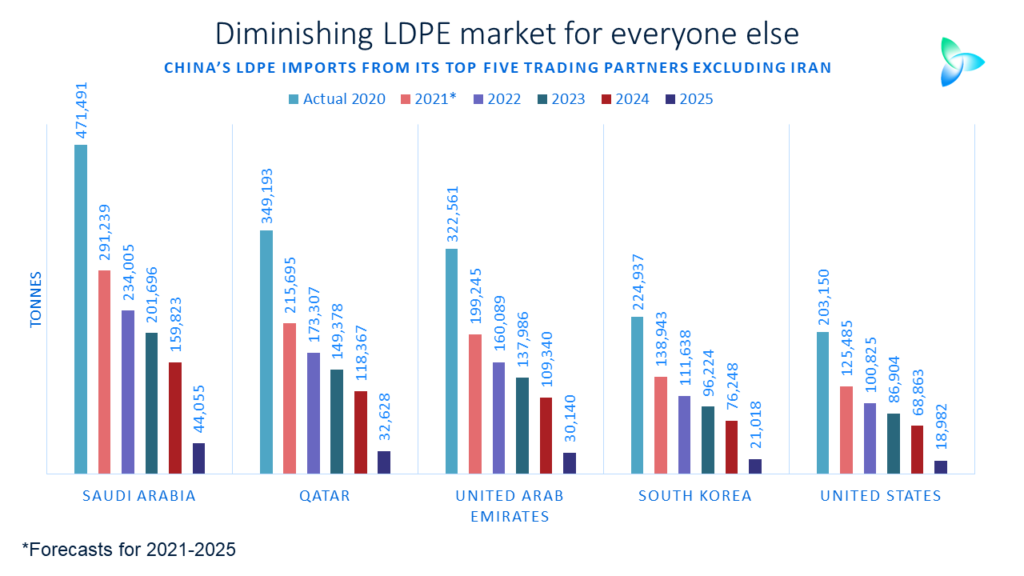 Using the same methodology as for HDPE, the above chart shows what the effect would be on China’s five biggest LDPE trading partners excluding Iran.

LDPE would surely be no different from HDPE, however. I believe that outcomes would not be as linear as this because of shifting geopolitics. There is a scenario where the US ends up as the biggest loser.

This again just scratches the surface

The above scenarios took me about a day to put together, along with 24 years of covering petrochemicals markets where I have discovered that standard cost curve and cost-per-tonne analysis will only get you so far.

This is far from complete scenario work as I just scratch the surface of the complexities out there. There are so many more variables to consider, along with many more potential outcomes.

Once these other variables and outcomes have been considered, your task will be to constantly update your scenarios in an incredibly uncertain and volatile world.

Get used to it, I am afraid. There are no shortcuts that will yield worthwhile results as we live in a petrochemicals world that will mainly be shaped by the four megatrends.