TRADE DATA when combined with price assessments, supply and demand estimates and market intelligence is the modern-day equivalent of alchemy with a rather important difference: we can genuinely convert numbers and conversations with the market into gold, unlike the bogus science of alchemy.

A great example is the chart below, the first of three in today’s post. Together, these charts – along with the logic behind the commentary – tell us that the fall in Chinese PP exports is only temporary. I believe we could see a pick-up in exports as early as Q1 2022 as the long-term structural oversupply in the Chinese market reasserts itself. 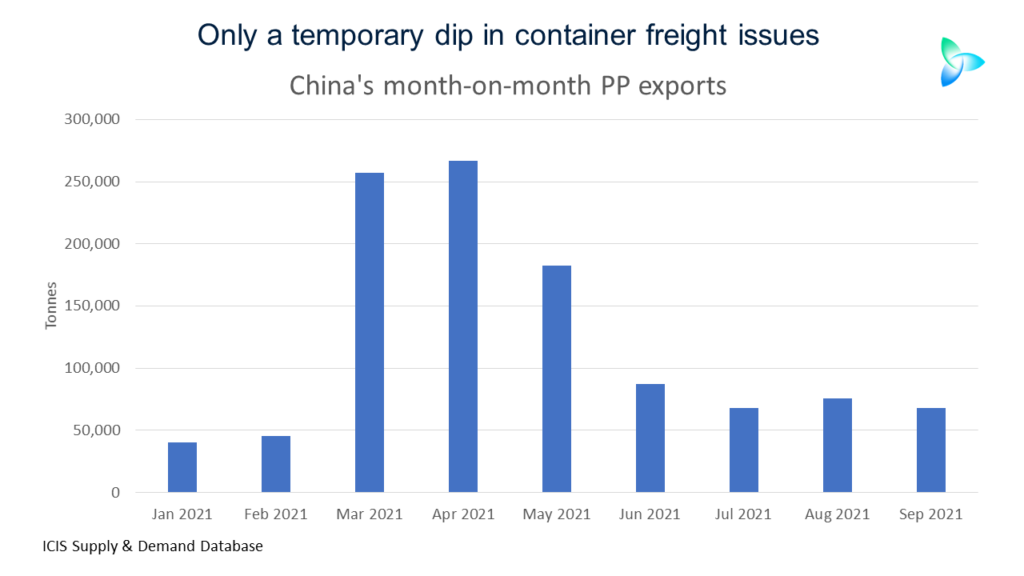 This first chart shows the month-on-month total Chinese PP exports in January-September 2021, which is the latest trade data available (the October trade numbers will be available from our ICIS Supply & Demand Database towards the end of this month).

Since the March-April peak, overseas customers have been less willing to buy Chinese material because of the risk of delayed deliveries due to the long-running container shortages.

Also, most of the March-April peak was down to a surge in exports to Vietnam, India, Pakistan and Bangladesh where supply was tight because of lower Middle Eastern and Indian production. Production has picked up the Middle East and India since then.

In Vietnam, we estimate a 75% average PP operating rate this year versus 68% in 2020 because of more stable production at plants that have come on stream over the last few years. I understand that local production has increased since April.

Despite the difficulties in securing containers that will arrive in time frames acceptable to customers, Chinese exports to Brazil and Peru have remained consistently stronger than last year so far durin2021.

And as the ICIS Pricing charts below show, arbitrage for moving Chinese PP to at least five of the top ten Chinese destinations in 2021 appears to remain open. This applies even when you factor in astronomically high container freight rates. 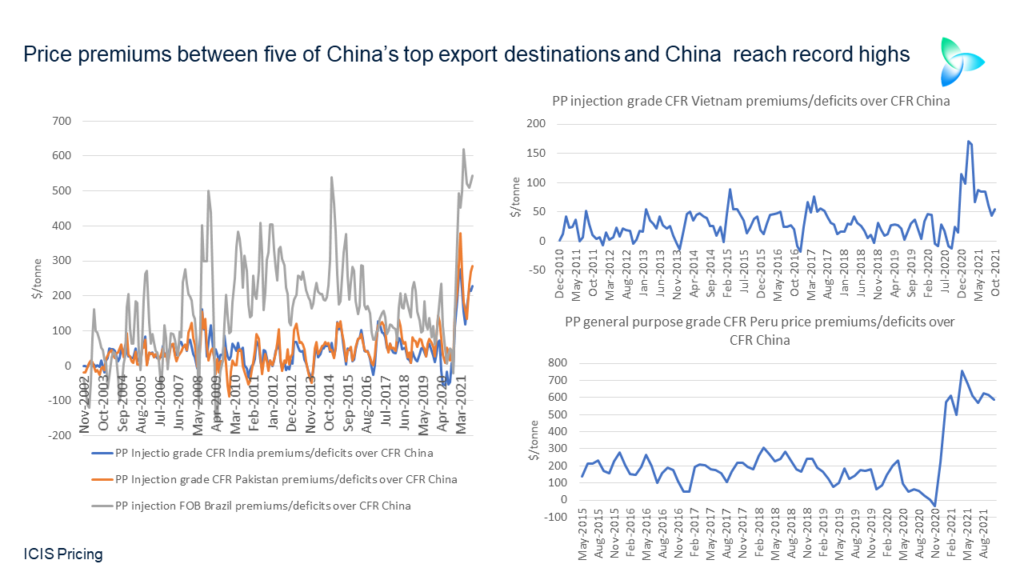 “I think what this tells us is that the fall in exports to Vietnam and South Asia is more about production issues than containers,” said a market source.

“In general, I also believe that confidence among some customers about the reliability of Chinese exports, both in terms of quality and delivery times, is still being built as we’ve never seen total China exports at these levels before,” he added.

“It’s important to point out, however, that there are no confidence issues in Vietnam over Chinese PP. This is a well-established trade because of the free trade deal between the two countries which means zero import duties for Chinese PP,” he said.

On the contact’s point about total Chinese exports, during the first eight months of this year, exports reached 1.1m tonnes versus 424,746 tonnes for the whole of 2020. And even though exports dipped to 68,268 tonnes in September from their March-April peak, the September exports were still much higher than average monthly exports in 2020 – 35,395 tonnes.

ICIS data and analysis tell us why we’ve seen the big increase in exports:

Some 30% of Chinese PP production is coal-based via the coal-to– PP processes. Since September, operating rates at Chinese coal-based PP plants have fallen from around 70% to 60%, the result of local shortages of coal and soaring coal costs, say contacts.

Even though the government is determined to increase coal supplies and drive prices down, sources expect cutbacks at coal-based plants will reduce PP exports up until December versus January-September.

But China’s coal and other energy shortages will obviously at some point end, likely early in the new year. Then we will confront these very different scenarios for China’s PP net imports and net exports that you can see in the chart below. This is a reminder of a chart I first ran in a post earlier this month. 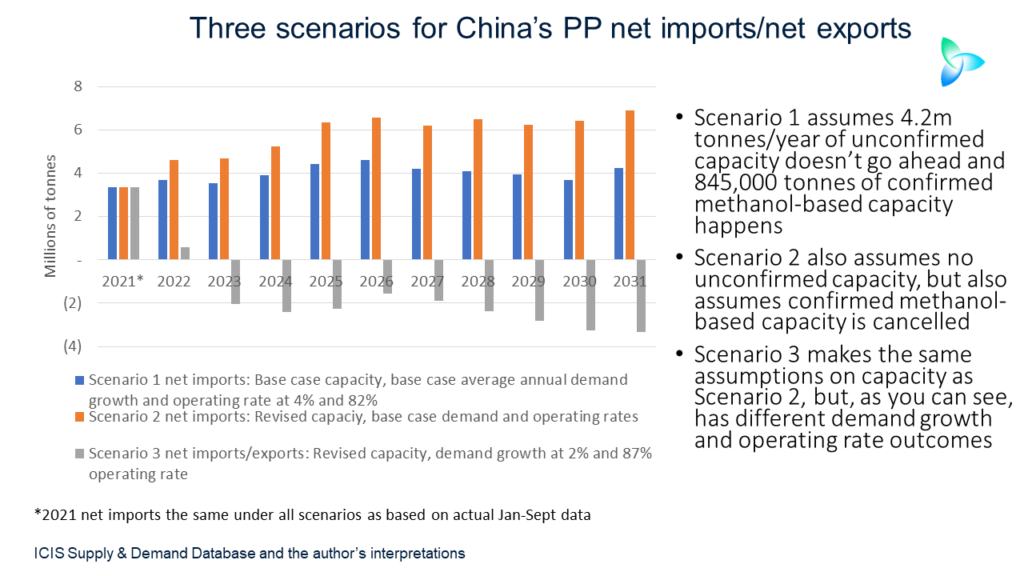 I was asked by a client last week to nail by colours to the mast, to say which of the three scenarios I thought most likely. I hedged a little, saying somewhere between Scenarios 2 and Scenario 3, with the outcome closer to Scenario 3 than Scenario 2.

This is for two reasons:

Why do I see China’s exports picking up from as early as Q1 2022? Because, as I said, by then energy shortages should have been resolved. And I think that the global supply chain crunch will ease during the early months of next year, including a fall in container freight rates. I shall explore this theme in detail in a later post.

But here’s the thing and back to my theme on turning data and analysis into gold: there are plenty of opportunities out there for global PP exporters to adopt the right, fully global sales tactics and strategies – supported by ICIS analysis and data.