CHINA’S POLYPROPYLENE (PP) demand will very likely still grow in 2021 despite what has been a disappointing year relative to expectations.

My latest estimate is for consumption to grow by 3% over last year. This is based on China Customs net import data and our local production estimates for January-September 2021. 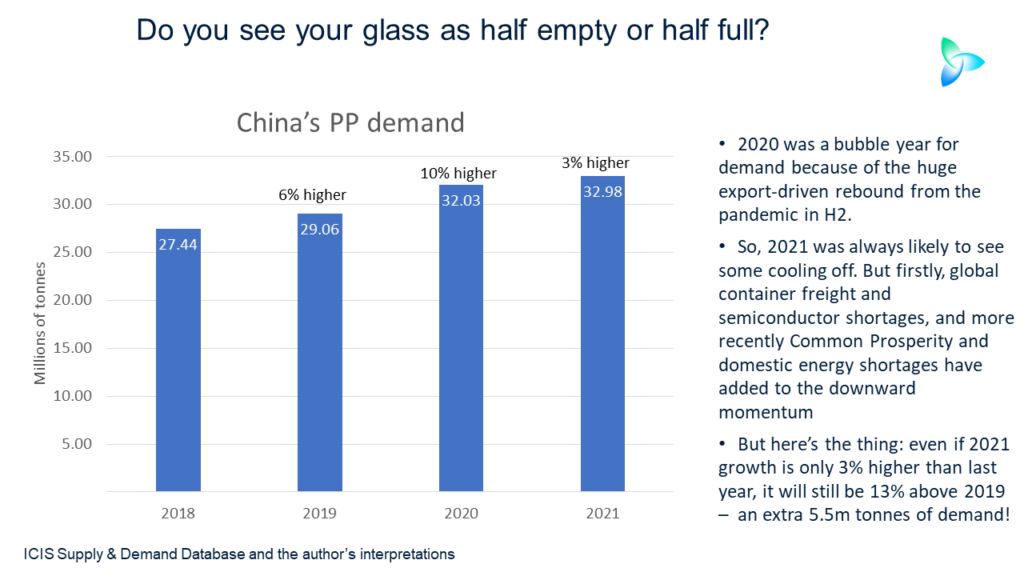 As I’ve been arguing since January this year, 2021 was always likely to be disappointing compared with 2020 because last year was a bubble year. China’s economy from April onwards roared back from the pandemic, thanks mainly to a surge in demand for finished-goods exports.

But what none of us expected was that container freight and semiconductor shortages would cause China’s exports of manufactured goods to decline by volume in H1 2021. This of course negatively affected PP consumption growth.

Then came the August 2021 Common Prosperity pivot, central to which is Beijing’s apparent willingness to let Evergrande default on its debts.

Views out there range from extreme scepticism about the pivot to the belief that China is genuinely building an entirely different economic growth model – one centred on lower debts, greater income equality and lower CO2 emissions intensity.

Where there is uncertainty over government policy direction and outcomes there can be weak retail spending. Could this partly explain why spending during this year’s Golden Week Holiday was disappointing?

We then have the energy shortages that started with insufficient supplies of coal, partly the result of the government’s commitment to hitting CO2 emissions reduction targets. The shortages have spread to diesel as the lack of coal has led to more use of small diesel electricity generators.

“Some truck drivers are having to wait entire days to refuel, according to posts on social media site Weibo,” wrote the BBC in this article.

Trucks are only being allowed to fill up 100 litres each – about 10% of their capacity, a truck dealer from Shijiazhuang city in Hebei province told Caixin. Elsewhere in China, drivers were reported to be limited to buying up to 25 litres.

We also have to consider the effect of China’s stringent coronavirus measures on the economy. In Beijing, for instance, which has reported only 31 infections since, mid-October, some entertainment venues have been shut with quarantines imposed on large residential areas. Travel to and from Beijing has also been restricted

Get used to lower long-term growth

Growth of 3% in 2021 would still be disappointing relative to some expectations, as I said earlier. Our base case for 2021, for example, sees a 7% increase this year over 2020 (see our excellent ICIS Supply & Demand Database).

Let’s hope this higher estimate is right. But, because of all the uncertainties created by global supply chain constraints, Common Prosperity and the local energy shortages, you should build a scenario for the impact on the local and global PP businesses of only 3% growth.

And beyond this year, I see every chance that if China sticks to its Common Prosperity guns, its economic growth will become less commodity intensive. Or to put it another way, each percentage point of growth will require lower quantities of iron ore, steel, cement and petrochemicals than in the past.

This wouldn’t mean that growth for petrochemicals would turn negative because I believe that China’s GDP growth will remain strongly positive. It would instead be the case that multiples of petrochemicals growth over GDP would be lower than some forecasters anticipate.

I am of the view that Beijing will follow through on its Common Prosperity commitments. It doesn’t have any other choice as the old growth model no longer works. 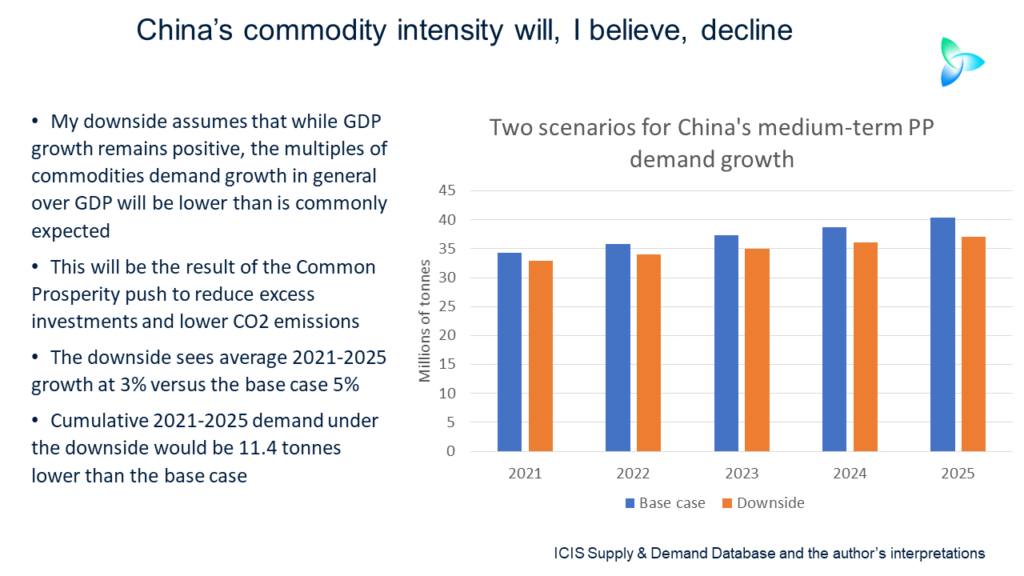 This year’s PP imports as opposed to net imports (net imports are imports minus exports) look set to fall to 4.8m tonnes from 6.6m tonnes in 2020 – a 27% decrease when you look at the exact numbers.

But the Common Prosperity pivot points towards some of China’s PP and other petrochemical projects not going ahead for environmental reasons – and to wean the economy off on overreliance on debt-heavy investment.

This will likely, though, only apply to projects with start-ups scheduled for 2024 and beyond, as construction will already be underway for projects scheduled to come onstream before then.

Perhaps the amount of project cancellations will be so great that even under a scenario of declining demand growth, China won’t end up entirely PP self-sufficient. Before the Common Prosperity pivot, there seemed a very good chance of complete self-sufficiency by as early as 2025.

What could have implications for how much capacity China is able to build is the decision by Beijing to cap refinery capacity at 1m tonnes/year with the limit set to be reached by 2025. The decision was announced just ahead of this week’s COP26 meeting in Glasgow.

I will explore this theme in more detail in later posts. Suffice to say here, we need to compare this cap with previous estimates of the growth in China’s refinery capacity and what this change could mean for naphtha, refinery propylene and propane feedstock availability.

Maybe, if it still has enough feedstock, China will only cancel coal-based PP investments as they are highly carbon intensive while allowing cracker, refinery and propane dehydrogenation-based PP projects to still go ahead.

If coal-based projects are cancelled this would not be a big deal because between 2024-2034, ICIS forecasts that they will account for just 8% of capacity additions.

The key equation for exporters to China is of course working out the balance between the number of project cancellations versus “lost demand” – how much lower demand growth will be than previously expected.

No one-size-fits-all scenario will give the major exporting countries to China – South Korea, Singapore, Taiwan, the United Arab Emirates, Saudi Arabia and Thailand – the right answers.

Their business plans will only be bullet proof if they build a range of outcomes, so complex are the new variables. And clearly, they will need to stress test their operations under the worst-case scenario.

Conclusion: why confusion is good

The first stage of the new China muddle will unfold over the next six to 18 months as Beijing builds its new economic growth model. Every policy announcement and interpretation of the policies will add to petrochemical market volatility.

Then will come a wide range of potential long-term outcomes that raise the following questions:

Confused? I certainly hope so as anyone who is not is at risk of business-destroying oversimplification. Confusion must be followed by revised planning around new sets of parameters.