THE THING about the collapse of China is that, like commercially viable nuclear fusion and peak oil, it is always ten years away from happening. In other words, I don’t think it will happen.

But as the journalist and author Richard McGregor said in this Dan Snow history podcast on this year’s 100th anniversary of the Chinese Communist Party (CCP), the days of double-digit Chinese GDP growth are very probably behind us, barring, goodness forbid, further rebounds from pandemics.

McGregor, author of the excellent history of the CCP, The Party, underlined my argument that the urban middle classes, who have enjoyed the greatest benefits from China’s stunning economic growth, won’t have it as easy in the future. Core elements of the “common prosperity” policy pivot, as I discussed in this blog post, are reducing income inequality with a particular focus on the disadvantaged rural provinces.

McGregor highlighted two of China’s other challenges – its rapidly ageing population and an external world that is “less open” to China, most importantly the US. These are themes I have again discussed on the blog, in the case of China’s greying population for the last 10 years.

But the transition period will be highly uncertain

How low might Chinese GDP growth go over the next few years as China transitions to a new economic growth model? None of us really know, of course, but what’s evident is that the downside risks are substantial.

And during and after the transition, whatever GDP growth ends up being, I believe that China’s economic growth will be less basic commodity intensive. Therefore, even if GDP growth remains robust, the multiples of commodities demand growth over increases in headline GDP will, in my opinion, decline by more than is commonly thought.

China will still, though, require bigger volumes of oil, gas, iron ore and petrochemicals because of its large existing  base of demand.

Before I give you estimates for the impact of this transition on global high-density polyethylene (HDPE) and polyvinyl chloride (PVC) demand in 2021-2031, what follows is important context on why China wants to reduce the commodity-intensive nature of its economic growth.

Using steel as an example, Carbon Brief wrote in this excellent report that during the past five years, steel demand growth significantly exceeded government targets and forecasts. GDP growth was in line with targets but was far more steel-intensive than had been expected.

And with rising steel demand has come a big jump in CO2 emissions, endangering China’s attempts to hit peak emissions before 2030 and carbon neutrality by 2060. The pollution generated by steel production, as most of the sector’s energy comes from coal, is jeopardising another core objective of “common prosperity” – further cleaning-up China’s air, water and soil.

As steel, cement and petrochemicals have fed rapid real-estate expansions, corporate and consumer debt has increased. At more than 250% of GDP, China’s total debts are greater than the US. By the end of last year, China’s household debt as a percentage of disposable income was at a record-high of 104%. Reducing property sector leverage is a further feature of “common prosperity”.

By increasing its presence in environmentally sustainable manufacturing such as electric vehicles, blue and green hydrogen to power steel and petrochemicals production as well as plastics recycling, China can justify the higher wages that are a product of a shrinking working age population. All these industries are high value.

It has been a remarkably successful journey for the global HDPE and PVC industries as the chart below contextualises. 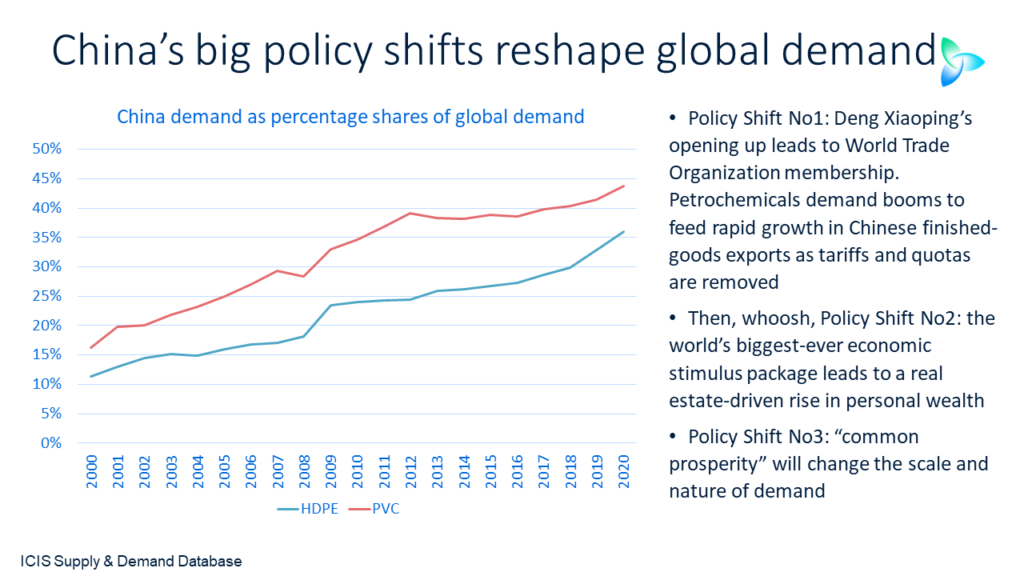 The chart below shows our base case, from earlier this year, for global HDPE demand in 2021-2031. 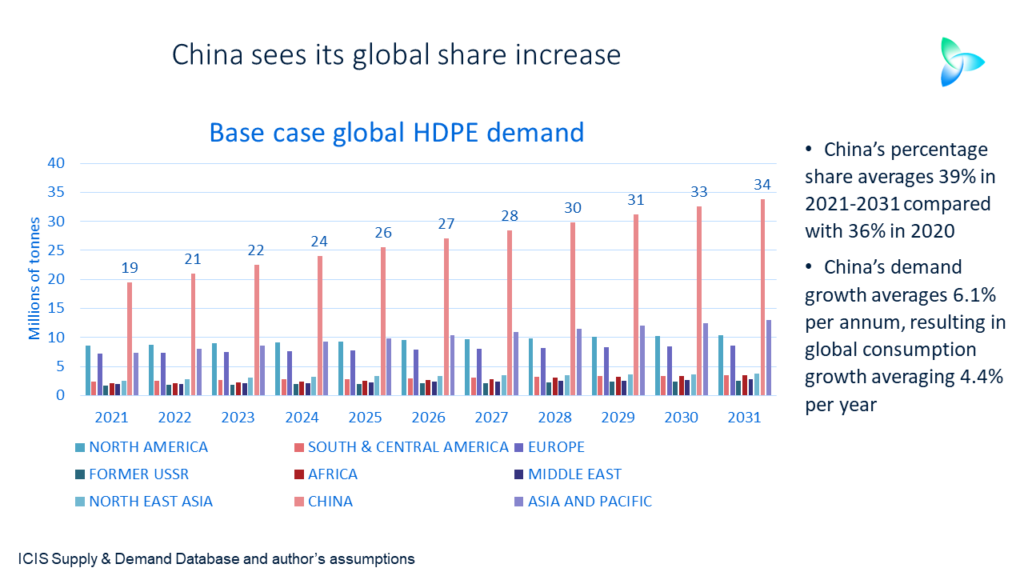 What would happen if Chinese annual average growth was around two percentage points lower on reduced infrastructure and real-estate investment and the sustainability push? 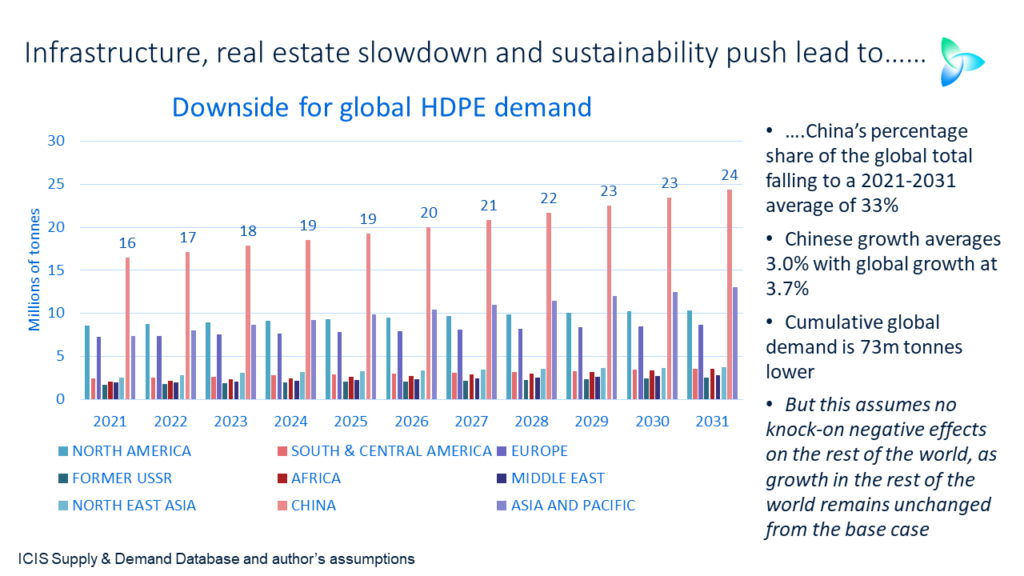 Note that in the event of Chinese overall GDP growth remaining robust, then perhaps there would be no negative knock-on effect on HDPE consumption in the rest of the world under this downside. But if China’s GDP growth saw a sharp dip, demand in other regions would be lower than we assume in our base case as the global economy weakened.

I repeated the same exercise for PVC. Here is our base case as of October this year. 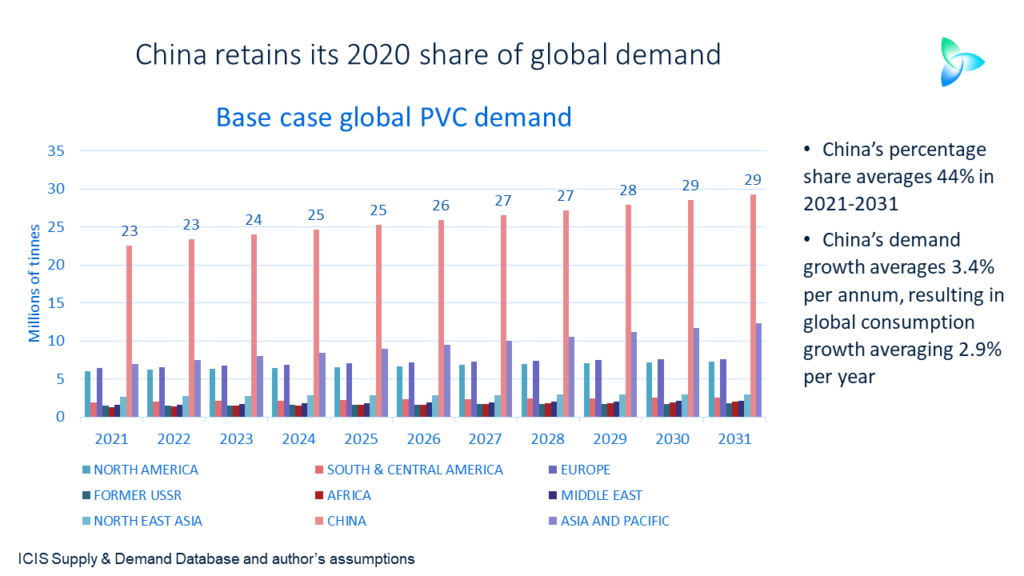 And here is my downside.

In the downsides, the headline figures seem quite shocking: global cumulative HDPE demand in 2021-2031 is 73m tonnes lower than our base case with PVC 45m tonnes lower.

Separating the Winners from the Losers

The Winners will be the petrochemical producers with the lowest cost positions who are able to capture the demand growth that will still happen as the Chinese economy becomes less petrochemical-intensive. Low-cost Winners will obviously be those who produce in China and export to China.

The complexity surrounding Chinese capacity growth – and therefore its future levels of imports – has greatly increased over the last few months as “common prosperity” has become more firmly anchored in government policy. Watch this space for further posts on this subject as there is not enough space here to do the theme justice.

The Winners will also be forward-looking companies such as BASF with its low carbon-emissions cracker and derivatives project in China and LG Chem through its expansion into electric vehicle batteries that helped it achieve record-high Q2 2021 profits. Both in China and elsewhere, a route to success is through innovative chemistry and chemicals engineering that solve the climate change and plastic waste challenges.

The opportunities in China remain fantastic, huge, as the country’s new growth model develops. Contact me at john.richardson@icis.com for information on how ICIS can support your business in making the transition along with China. We have a big sustainability team, along with our traditional petrochemical analytics and consulting services.