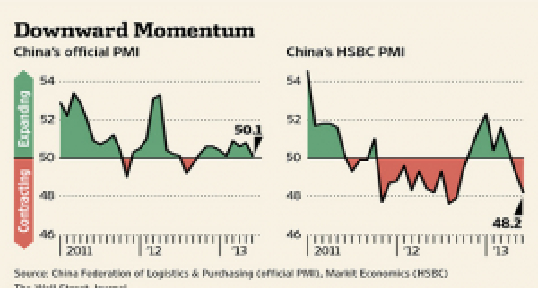 Unsurprisingly China’s Q2 GDP was reported at exactly the current target of 7.5% yesterday.  This confirms, as premier Li noted 2 years ago, that GDP is a target for local Party members, not a calculated output.  This is why it can be announced within 2 weeks of the end of the quarter.  By comparison, it takes the USA a month to announce a “first estimate” – and this is often then significantly revised as more detail slowly becomes available.

Now, however, the new leadership are beginning to change the system.   The key announcement came from President Xi earlier this month, that GDP growth would no longer be the sole criteria for promotion within the Communist Party for local officials.  As official news agency Xinhua noted:

“A huge proportion of local government investments have not generated any cash flow, and the only reason China has not seen massive defaults is that the projects received either fiscal support or took on new debts to repay the old ones”.

It is hard to underestimate the potential impact of Xi’s statement, which marks a major change from the failed policy of the previous leadership.  Already we have seen the impact in financial markets at the end of June.  In preparation for the news, the central bank temporarily pushed short-term interest rates up to 28%.

The aim is to take China’s economy in a new direction.  The blog argued back in November that this would become a major priority, based on its personal experience of China’s development in the early 1990’s.  Now an analysis from Bloomberg confirms this view:

“ The jolt Premier Li Keqiang delivered to China’s financial system emulates a playbook crafted by predecessor Zhu Rongji in the 1990s, inflicting short-term pain in the anticipation of long-term gain.  Li, who took office in March, sent the clearest message yet the past week that China’s new leadership team wants lenders to rein in credit expansion, depriving money markets of liquidity in the biggest squeeze in at least a decade. Next steps may include tightening that sends some smaller financial institutions into bankruptcy”.

And it went on to note a little-reported statement from Li that “This ‘self-imposed revolution’ would ‘even feel like cutting one’s own wrist’”.

Li chooses his words carefully, and so we have to assume he means what he says.  As the chart from the Wall Street Journal shows, China’s manufacturing output is slowing.  And crucially, there are no signs of panic or talk of a new stimulus programme.  As Xinhua commented “It is time to deflate bubbles and restore normal practice. The road-map is clear.”

The new policy is focused on boosting domestic demand among the 96% of the population who earn less than $20/day.  Reforming shanty towns, for example means building new homes for tens of millions of people.  But these will not be luxury apartments full of western-type goods.

Instead, there will be massive demand for affordable refrigerators selling for $50 each, and similar products.  Companies who can meet these needs will do very well indeed over the next few years, as the new policies are put into effect.