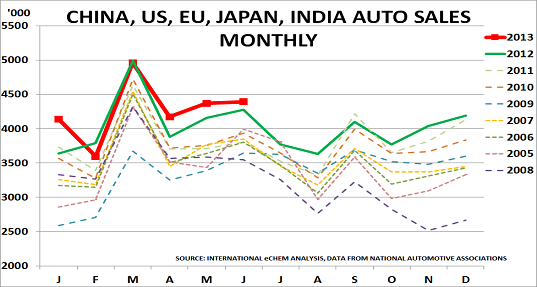 These 5 markets were 71% of global sales in 2012.  So the fact their growth rates have halved from the 8% seen in H1 2012 tells us something vital about underlying consumer demand.

Equally important is that US markets are being driven by special factors, whilst China’s demand seems unsustainable.  In the US, for example, analysts Edmunds note:

“Is buying a used car always cheaper than buying a new vehicle?  In most typical economic climates, the answer is a resounding “yes.” However, the current economic climate is anything but typical. In fact, the deals on some new cars are so generous they actually make a new car less expensive than both a one-year-old used and certified pre-owned version of the same model.”

Whilst in China, increasing restrictions on new car sales in the Tier 1 cities lead analysts Neilsen to suggest 70% of car buyers will have to come from Tier 3 and 4 cities next year, compared to 50% today:

“The major demand for passenger cars is transferring from coastal areas to central and western China and to lower-tier cities.”

Lower incomes in these cities will mean demand is for smaller, cheaper cars – more likely to be supplied by Chinese rather than foreign manufacturers.  Equally, the restructuring of China’s economy now underway will lead to much lower demand growth overall, as the lending binge comes to an end.

Meanwhile the structural factors that have reduced sales in the other 3 markets seem unlikely to go away.  Ageing populations in Europe and Japan have less money to spend, and also drive less as the kids leave home and they retire from work.  Whilst even optimists in India fear any car sales recovery is at least a year away, as the economy weakens.

The good news is that auto giant Nissan-Renault  is leading the way in the transition to the New Normal.  Its low-priced Dacia range saw European sales increase 18% in H1 – a powerful vote of confidence for this concept in a declining market.  Equally, it is now showcasing its new Datsun range for sale next year in India, Russia and Indonesia.  The 1.2l 5-seater hatchback will retail for just $6.7k, even cheaper than the Dacia.

The greatest opportunities occur during major secular market shifts.  Most companies miss these shifts, and go out of business.  But those, like Nissan, who have the courage to back their own judgement can instead expect to build a new franchise that will last decades.