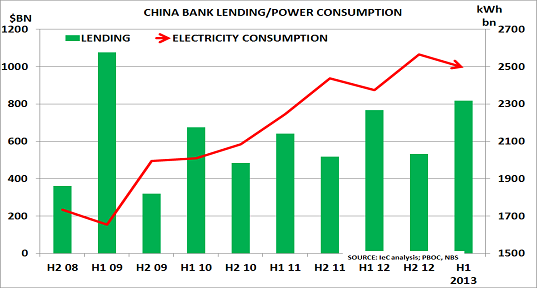 China’s economy is continuing to slow, as the new leadership takes power.  As the chart shows of H1 performance:

These levels are of course well below the published GDP figure of 7.5% for Q2, but the two types of data are quite different in their role.  GDP targets are set by the Communist Party and are currently the main mechanism for promotion for party officials.  But economic growth is better estimated from real output numbers such as electricity consumption and lending growth.  Logic, after all, suggests it would be quite impossible to calculate an accurate GDP figure on a Western basis within 2 weeks of the end of the quarter.  Most companies at this stage have not even finalised their own results, let alone had time to report them to central government.

The next 6 months are thus likely to see major changes in China’s economy.  President Xi and premier Li simply cannot afford to let things drift further, as an unprecedented editorial in the state-owned China Daily makes clear.  Editor-at-large Ed Zhang does not seek to hide the problems now facing the country, and his analysis deserves quoting in some detail:

“Funds wasted by those in local government are drain on economy and will badly hamper urgently needed reforms….

“Premier Li Keqiang and Finance Minister Lou Jiwei must have been aware of how many big-ticket investment projects were going on in China and how much money they were gobbling up. But no mathematical modeling could ascertain how much damage those wasteful projects have done and are doing to society.

“Now, most local governments are prisoners of the investment projects they began in haste and are regretting at leisure because they did not have the resources to take the projects to a profitable conclusion.

“Therefore, it is unrealistic to expect a rapid rise in consumer spending in China. All the old investments have a double dampening effect by channeling society’s money away from consumers and by supporting often excessively large projects that offer little use to small private companies.

“As for the government, officials need to go through a thought-provoking learning process to realize that some things are more important than just big money and big numbers.

“They also have to learn how to create jobs without building new factories, to generate prosperity (and tax revenue) without spending a lot of public funds and, perhaps, to sell some of their useless projects to turn-around managers from the private sector.

“Before the country goes through a process like this, it is highly likely some investors will lose money on China, including those involved in urban housing projects from second-tier cities down. They will lose their investment in manufacturing than in the service sector.

“They will be at even greater risk if the companies in which they invested have been collaborating with local governments in uneconomical development projects, especially the very large ones based on filling in the sea or leveling a mountain.

“The investors at most risk are those whose funds are in wealth management products that channel funds for local governments.”

China’s National Audit Office has now begun an emergency audit of all local government borrowing, in order that Xi/Li can understand the scale of the problem they have inherited.  And as Moody’s notes, there can be only one outcome from this:

Those who focus on the published GDP numbers are thus missing the real story.  Of course Party officials will still meet their target levels whilst this audit is carried out.  But real economic growth levels may well be negative by the end of the year if the balance sheet problems turn out to be as bad as many external observers fear.

Companies who have not yet developed a contingency plan for this development therefore now need to move very quickly indeed.