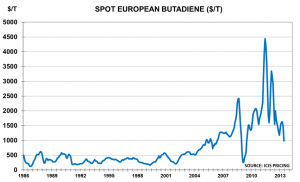 Chemical markets continue to provide the best real-time evidence of what is happening in the wider economy.  For a while, they lost their function of price discovery, as the oil price bubble caused buyers to panic and buy forward.  But this panic couldn’t last forever.

Now we are seeing the reverse side of the action, as prices begin to reconnect with reality.  Butadiene provides one of the first examples, as the chart shows of spot European pricing:

Butadiene was in the eye of the storm, as the rising oil price coincided with the shift from naphtha to ethane feedstocks for petchem plants in the Middle East and USA. Butadiene supply was reduced as a result, causing prices to reach an all-time high at $4500/t in mid-2011. In turn, this reduced demand. Consumers simply couldn’t afford to pay higher prices for tyres.

But now China has woken up to the problem, as official news agency Xinhua describes:

“In the wake of the global financial crisis in 2008, the central authority adopted a 4-trillion yuan stimulus package comprising of massive infrastructure investment and bank lending.  While the stimulus helped lift China out of the shadow of recession, commercial banks, real estate developers and local governments used the package as a chance to start a credit binge over the past years. Sadly, a substantial amount of the money flowed into financial derivatives rather than the real economy.”

Thus we are now seeing the downside, with further price falls likely as both butadiene and oil return to their pre-2004 historical levels.  And demand for other petchems may also now weaken, as Western central banks start to wind down their stimulus programmes.

What a waste this has been.  The central banks have destroyed demand rather than creating it.  Markets will take years to recover.  Even worse is that major new butadiene supply has been planned on the basis of the unrealistic price signals created by the bubble.  470KT of new capacity will come onstream in China, Indonesia and Taiwan in just the next few months.

Sadly, those involved in butadiene are unlikely to be the only casualties, as the central banks’ bubble continues to unwind.