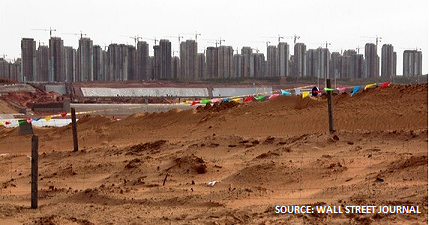 Asset bubbles are great fun whilst they last, as the West found out during the sub-prime era.  The supply of money seems endless, and prices just keep rising to the skies.  Meanwhile the regulators are busy assuring everyone that ‘this time is different’ and its quite safe to invest.

The problem is that so-called ‘common sense’ is not very common during a bubble.  It all seems so easy to make money and boost economic growth, that many people prefer instead to suspend disbelief.  But if it was possible to create perpetual growth via bubbles, we would never have recessions.

Today, of course, the bubbles are starting to burst.  And as always, the major problem areas are where the greatest departures from reality have taken place.  No blog reader will therefore be surprised to learn that the Chinese city of Ordos, for example, is apparently struggling to pay its workers and repay its debts:

Meanwhile one of China’s top 3 shipbuilders, Rongsheng, is struggling to survive, with many of its 12000 workers unpaid since March.

Similarly, in Brazil, shares of former leading oil company OGX have fallen 90% this year, causing owner Eike Batista to make major cutbacks in his resources and logistics business.  Yet in March last year, he was ranked as the world’s 8th richest person.

Now the supposed experts who failed to spot the bubbles on the way up, are explaining that these are just isolated problems.  This, of course, is what people said about Bear Stearns in July 2007, when the blog suggested this was the first sign of sub-prime trouble.

As the great Spanish philosopher George Santayana wisely noted in 1905, ‘those who cannot remember the past are condemned to repeat it“.  The blog fears that many emerging economies now risk being submerged by the debt they took on whilst the bubbles were still expanding.