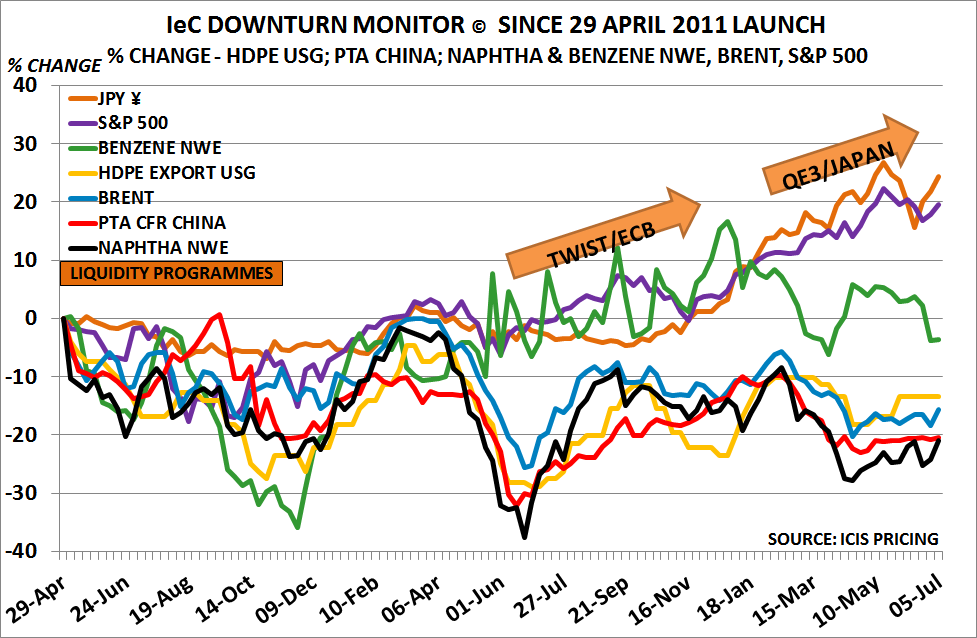 And then there were two….  When history comes to be written, 29 April 2011 will have a strong claim to be selected as the date that the central bank liquidity programmes began to visibly fail.

Most executives joined the workforce during the 1983-2007 SuperCycle, and came to believe that constant growth was now “normal”.  The US economy saw just 17 months of recession in these 25 years.  Previously unknown concepts such as ‘pent-up demand’ and ‘stretch targets’ were normal for them.    Demand might slow for a few months, but would then come racing back.  So they expected to be set targets that reflected this reality.

Most were surprised, therefore, when demand began to slow in 2010.  But experts and senior government officials argued that ‘just a little more time, and a little more money’ would solve the problem.  So QE2 was launched in November 2010.  And in Q1 2011 demand seemed to improve.

But by the end of April 2011, markets began to slow again, causing the blog to launch its Downturn Alert.  Its argument was simple.  The western babyboomers whose demand had powered the SuperCycle were now ageing, and so demand patterns were changing.  55-year-olds can’t become 35-year-olds again.  And 55-year-olds are a replacement market, as they already own most of what they need.  Plus, their incomes reduce as they move into retirement.

This seemed like a statement of the obvious.  But it still seems lost on governments and central banks, who have now wasted $33tn in a vain attempt to turn back the tide.  Only China has woken up to the stupidity of its previous policies, with the new leadership announcing “It is time to deflate bubbles and restore normal practice. The road-map is clear. ”

The chairman of the Federal Reserve, Ben Bernanke, sees things differently, of course.  Back in August 2007, he had told Congress that the sub-prime losses were significant, but would be no more than “between $50bn and $100bn”.  Today, he continues to wear his rose-tinted spectacles, and believes he will retire next year having solved the crisis.

He has thus encouraged financial markets to believe that the US economy is now in full recovery.  That it is strong enough to deal with the negative impact of the $1.2tn sequester.  And that the housing market can deal with long-term interest rates that are moving back to 4% and higher.

But chemical markets are telling a different story.  As the chart shows, most of its benchmark products have never recovered their pre-29 April 2011 price levels.  Benzene (green line) was the exception that proved the rule, as a by-product whose supply was dramatically reduced by external factors.  But now, its price is also again lower.

Only the two financial bubbles are still bubbling away, supported by the last of the Fed’s QE3 programme and recent Japanese/European liquidity.  The S&P 500 (purple) has set new records, whilst the US$ (orange) is climbing strongly versus the Japanese yen.

Of course, Mr Bernanke may be right this time.  But the blog puts more faith in chemical markets as an accurate reflection of the real world where the rest of us live and work.  It fears that many people will be disappointed, and alarmed, when they return from their summer holidays in September to find the Fed’s promised recovery has failed, once more, to appear.

The chart shows latest benchmark price movements since the IeC Downturn Alert launch on 29 April 2011, with ICIS pricing comments below:

Naphtha Europe, black, down 21%. “Fundamentals are weak as oversupply and flat demand persist”
PTA China, red, down 20%. “Demand for imported cargoes is expected to shrink further in July”
Brent crude oil, blue, down 16%. “Losses reflect continued weakness in both the US and Asian markets”
HDPE USA export,  yellow, down 13%. “Demand in the export market is generally weak”
Benzene Europe, green, down 4%. “Demand was low because of limited buying interest from the derivative sector”
S&P 500 stock market index, purple, up 20%
US$: yen, orange, up 24%