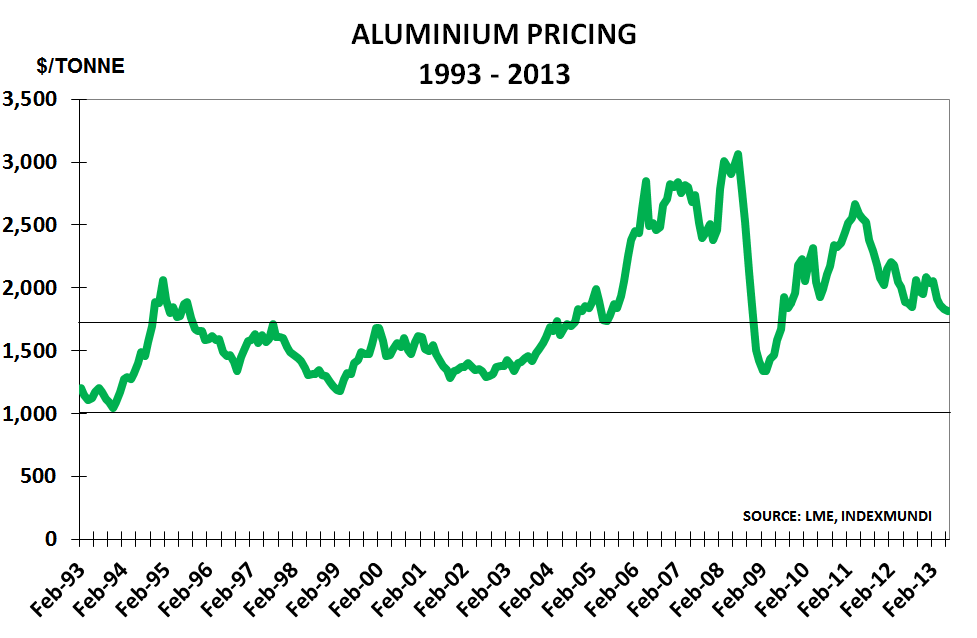 Now this may be about to change.  As the blog noted in March, aluminium prices have been supported by the behaviour of the warehouse owners associated with the London Metals Exchange (LME).  According to the Financial Times, companies such as Goldman Sachs and JP Morgan have made large profits by taking advantage of a loophole in the LME’s rules:

“In the past two years, warehouses have sucked up stocks of aluminium, copper and zinc. These so-called “warehouse wars” have helped to drive up physical premiums – the cost of metal over and above the LME benchmark – to record levels, creating a disconnect between the LME price and the physical market and leading metal users from Coca-Cola to General Motors to voice their dissatisfaction.”

Now the new Hong Kong owners of the LME are talking about changing the rules.  If they succeed, which looks likely, the market will soon be very different:

In turn, this has kept perceived demand strong for caustic soda strong, as the smelters operated to fill the warehouses.

What will happen next?  It seems that Goldman and JP Morgan have decided to exit the warehouse business.  The blog therefore fears its forecast from March may soon now come true, “when the party does eventually come to an end, companies (including chloralkali producers) will suffer major losses on inventory values. Whilst operating rates may well crash until the stock overhang is worked down.”