Demographics has “frightening implications” for the economy 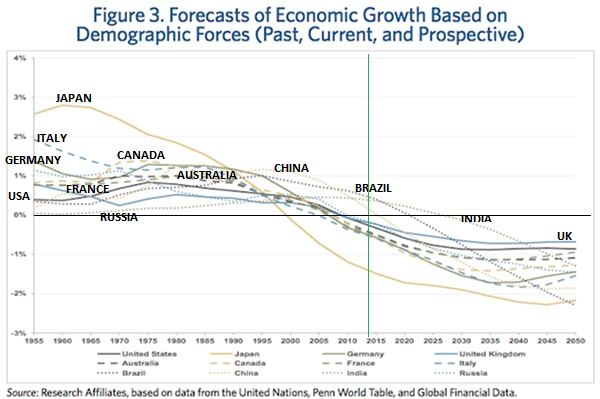 The blog first wrote about the potential impact on GDP growth of changing demographics in January 2010, in its first White Paper, ‘Budgeting for a New Normal’  This put forward the Scenario that the world economy could face an:

“L-shaped recovery, where we follow the pattern of the Japanese economy after its ‘financial bubble’ burst in 1990. The basis for this would be the ageing of the Western population, which could lead to a general slowing of demand growth on a longterm basis”.

This generated enormous interest.  2000 people downloaded the White Paper within 24 hours of publication.  It also led to the publication of ‘Boom, Gloom and the New Normal: How Western BabyBoomers are Changing Demand Patterns, Again’, co-authored with John Richardson.  This book has since inspired a number of major companies to invite the blog to present Strategy Workshops to their Boards and Management Teams.  It has also been asked to presented its insights at industry and financial conferences.

Today, these ideas are going mainstream.  The blog is now writing regular posts for the Financial Times (who have also appointed the world’s first demography correspondent).  Whilst the New York Times published a major analysis on the impact of demographics in Germany last week, which warned:

“There is perhaps nowhere better than the German countryside to see the dawning impact of Europe’s plunge in fertility rates over the decades, a problem that has frightening implications for the economy and the psyche of the Continent”.

Economists are also starting to study the issue, and coming to the same conclusions.  The above chart from a new paper by Research Affiliates, titled ‘Demographic Trends and GDP’, summarises their analysis for the world’s wealthiest G7 economies (US, Japan, Germany, UK, France, Italy, Canada), the major BRIC emerging economies (Brazil, Russia, India, China) plus Australia.  It concludes:

“Our main goal in presenting these results is to correct the common misconception that developed countries went through a “normal” period of high growth, as if we are all entitled to fast-growing prosperity. In reality, the developed world is entering a new phase in which the low fertility rates of past decades lead to slow growth (in many countries, no growth) ….[whilst] the unequivocal good news of a steady rise in life expectancy means that retirees will create a very substantial drag on GDP growth, as these seniors move from peak productivity to negligible productivity in just a few years“.

Companies are now preparing their assumptions for the Budget period 2014-6.  It is vitally important that they abandon assumptions of an inevitable return to the Boomer-led SuperCycle of steady growth and ‘pent-up demand’.  There is no pent-up demand, because the New Old 55+ are ~30% of the Western economy.  They not only don’t need to buy many new products, but can’t afford them as they enter retirement.

Equally, the New Old’s declining demand cannot be balanced by the populations of the emerging economies, as their incomes are generally a tenth of those in the West.  These New Poor, earning <$20/day, have mostly only entered the market economy in the past decade and have totally different needs and expectations.

This dramatic change in the economic outlook creates great opportunities for companies prepared to study the implications, and to adapt their business models to meet these emerging needs.  It also creates enormous risks for those who continue to believe that a return to SuperCycle growth is just around the corner.

Please email phodges@iec.eu.com if your business would like to know more about the blog’s Strategy Workshops, which have been successfully delivered in all major Regions.

Latest benchmark price movements since the IeC Downturn Monitor launch on 29 April 2011, with ICIS pricing comments below:
Naphtha Europe, down 16%. “Poor demand is expected to be offset by tightening supply as more European refiners cut run rates (due to poor demand for oil products)”
PTA China, down 16%. “Weak buying interest”
HDPE USA export, down 13%. “US material priced too high for most markets, except for Mexico”
Brent crude oil, down 13%.
Benzene Europe, down 1%. ”Talk of several production problems emerging in the US market”
US$: yen, up 20%
S&P 500 stock market index, up 22%