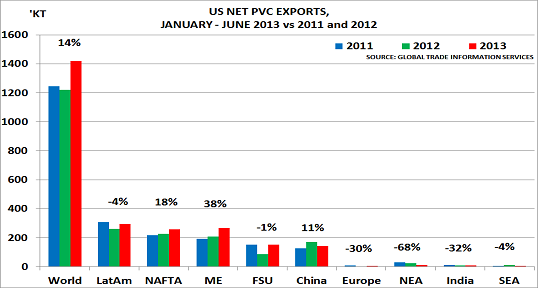 The casual observer might be forgiven for imagining that the US ethylene industry should be seeing its biggest export boom of recent decades.  Its ethane feedstock cost is back at its normal 25c-30c/gal range of a decade ago, whilst its oil-based competitors have seen their prices quadruple as oil moved to $100/bbl.  But as the chart shows for PVC (a major ethylene derivative), based on data from Global Trade Information Services, companies are finding it increasingly difficult to gain advantage:

Overall, of course, PVC producers have done a marvellous job in replacing lost domestic business with exports.  The collapse of the US housing market, with house starts down from 2 million in the housing bubble to under 900k today, meant a massive loss of PVC volume.  In response, producers pushed hard into export markets, which are now >40% of production.

But the major opportunities now appear to be in the past.  Export volume soared five-fold from 500kt in 2006 (as US housing began its collapse) to 2.5 million tonnes in 2010.  But growth then began to slow, with 2012 seeing only a small increase to 2.75MT.  2013 seems to be following this pattern.

It seems that a combination of weak global economic growth, plus the arrival of new capacity in other regions, is severely limiting US producers’ scope for further volume gains.  In turn, of course, this has major implications for the ethylene capacity expansions now being planed, as the blog will discuss tomorrow.