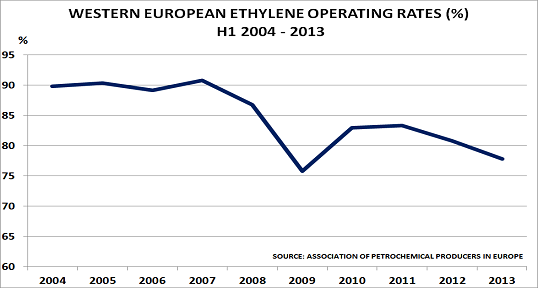 Life doesn’t get any easier for Europe’s olefin producers and the consumers who depend on them.  As the chart shows, based on latest APPE data, operating rates averaged just 78% in H1.  This is almost as bad as H1 2009, when they were 76%.  And it is a long way away from the 90% levels seen routinely until 2008.  The detailed figures are almost more depressing:

This dreadful situation may well continue, as long as central banks’ stimulus programmes continue to support oil prices at today’s unrealistic levels.  Producers have little choice but to pass these prices down the chain, even though they cannot be absorbed by end-consumers.  So volume and operating rates continue to make record lows.

There is also no easy solution within the industry’s control.  Its feedstocks represent only a small proportion of refinery output, and so its destiny is heavily dependent on upstream developments.  And European governments simply cannot allow many more refineries to close because of energy security risks:

Oil prices at today’s levels are thus the proverbial straw that potentially breaks the camel’s back as far as petchem producers are concerned.