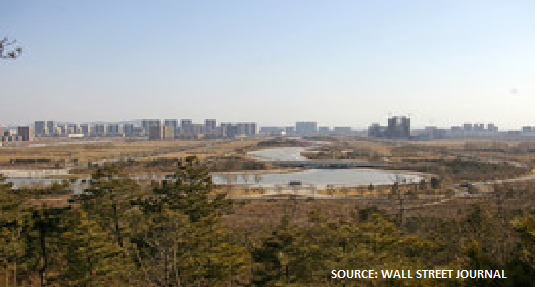 More details continue to surface of the wasteful spending that underpinned much of China’s GDP growth in recent years.  The empty city of Ordos (first highlighted 3 years ago in the blog) is just one example.  House prices there have recently fallen 50%, and the shadow banking system (critical for privately-owned companies) is reportedly in chaos.  Another is the city of Tieling, pictured above.

In 2009, it was told to build a satellite city 6 miles away.  Today, $bns later, the new city is a ghost town.  Affordable housing that won UN recognition for its quality is empty.  The businesses that were supposed to underpin growth by providing jobs, have simply failed to appear.

This highlights the problem facing the new leadership.  Do they stop the flow of money, or do allow spending to continue, hoping this might be the catalyst for the jobs to arrive?  Its a big decision, and for the moment it is being deferred.   Thus Tieling is spending $1.3bn this year on projects including an art gallery, swimming pool and gym.

Yet the decision cannot be deferred too long.  As Qiao Runling, a senior official with the powerful National Reform and Development Commission has warned:

“Reckless expansion of cities in China has left many of them empty.  Nearly every big or medium-sized city across China has plans to erect a new town… (and these) new towns are usually bigger than old ones and many cities are left empty as a result.”

Whilst Yu Yongding, a former senior Bank of China official was even more blunt:

“Why am I so concerned about the debt issue? Because based on my experience of dealing with local governments, I am sceptical whether they are willing and are able to repay the debts,”

Nobody yet knows the size of the debts run up by local government in pursuit of this policy.  But in a sign of their mounting alarm over the issue, China’s new leadership have told the National Audit Office (NAO) to give top priority to finding out the answer.  At the same time, the country’s 4 largest banks have been told to raise $44bn in new capital, presumably to help them meet the cost of the bad debts that will be found.

Worryingly, it seems they are finding it difficult to raise this money in China itself, as market sentiment towards the banks is very bad.  Thus the Wall Street Journal (WSJ) reports they are “considering selling the debt in markets outside mainland China”.  But it is hard to see why foreign investors would be prepared to invest, if local players find the offer unattractive.

Blog readers will not be surprised by these developments.  2 years ago, when the China boom was at its peak, the blog warned that it would all unravel, just as we had seen with the US subprime boom.  One clear sign of crisis emerging is that the bank regulator felt forced to appear on national television earlier this month to reassure people that their money was safe.  Thus Shang Fulin, chairman of the China Banking Regulatory Commission, admitted that:

“Banks face a large quantity of maturing local-government debt this year (and) that important risks stem from loans to local governments and those created outside banks’ balance sheets”.

So far, as with Tieling, the banks have been allowed to indulge in the game of “pretend and extend”.  As the WSJ notes, “many Chinese banks have resorted to extending maturing loans to avoid defaults”.  The alternative, of course, would be to declare the loans a bad debt.

Thus for the moment, Mr Shang can claim, “China’s banking industry remains relatively stable and healthy.”  But his use of the word “relatively” confirms that all may not be as it seems.  We will only know the true position when the NAO has done their work.  And even more worrying is the fact that, as the Journal also notes, “based on market capitalization, four of the 10 largest banks in the world are Chinese”.

Presumably, therefore, a large number of non-Chinese banks have cross-lending commitments with these banks.  And so there is clear scope for contagion to spread across the global banking system.