Home Blogs US PE exports up just 11% versus 2011, as focus shifts to Latin America

US PE exports up just 11% versus 2011, as focus shifts to Latin America 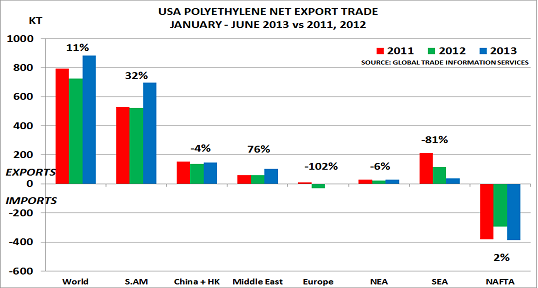 The only other major export markets currently are the Middle East and China.  Exports to SEA have plunged 81% since new capacity opened there.   And neither region seems likely to provide much opportunity to increase sales in the future.  The Middle East is already a major and growing exporter, with its own cheap ethane feedstock, whilst China is busy building new capacity to achieve self-suufficiency as quickly as possible.

Yet US producers are currently planning to dramatically expand US production of ethylene and major derivatives such as PE.  Undoubtedly shale gas provides a very competitive cost base for this expansion.  But in the New Normal – where demand is the key factor, not supply – the critical issue is whether this new production can be sold?  The blog will investigate this critical issue in more detail next week.