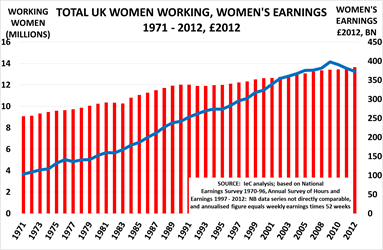 Whilst the number of working women in the UK continues to rise, since 2009 their total earnings have been falling in real terms. With consumer spending contributing to roughly 60 per cent of the UK economy, this has important implications for the sustainability of the current recovery.

Nearly 14 million women are working today compared to nine million in 1971, whilst their participation rate in the workforce has increased from 59 per cent to 75 per cent today.

There has also been a sustained rise in women’s pay relative to men.

As the chart below shows (green line), relative pay rose temporarily during World War Two, but then fell back as women were pushed back into lower-paying jobs once male troops rejoined the labour market. The 1970s, however, saw the start of a sustained improvement, as the arrival of large numbers of babyboomer women began to break down existing barriers. 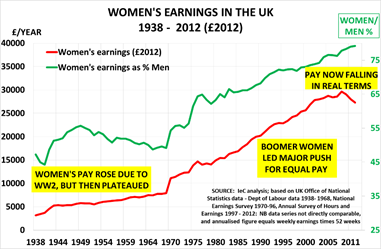 The Equal Pay Act of 1970 was thus followed by the 1975 Sex Discrimination Act and the Equal Opportunities Commission, and then by the limited introduction of maternity leave in 1978 under the Employment Protection Act. In turn, employers slowly began to accept that women could be interested in developing a career and in targeting more senior roles.

But today, some of this progress seems to be unwinding. Women’s average earnings, like men’s, are now declining in real terms as the recession has hit earnings growth. Workers in Britain of both genders are in the sixth year of a squeeze on incomes.

Women’s earning fell to £27,000 last year, equal to 2001-02 levels, despite two trends identified by the Bank of England which should have supportive of higher earnings:

This decline is not just bad news for women themselves and for their families. It also reduces household spending power, and thus removes a critical source of support for the broader UK economy at an important moment in the recovery from the financial crisis.