Home Blogs Chemicals and the Economy EU auto sales at lowest-ever level, with average car used only 1 hour per day 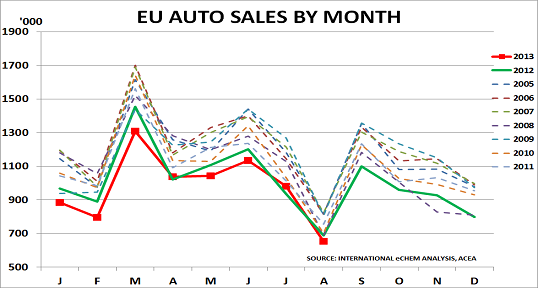 Europe goes on holiday during August, so we have to wait – with not quite breathless anticipation – until September to see official ACEA auto sales figures for July and August.

Unfortunately, they contained no real surprises.  July (red square) managed a small increase versus 2012 levels (green line), but August sales then fell back again. Overall, sales so far in 2013 are down 5% at 7.8m – the lowest figure ever reported since records began in 1990.  And they are 20% below the peak sales level seen in 2006.  They have fallen every year since then.  In terms of the major markets:

Once again, there are no prizes for guessing the two brands that continue to outperform.  Sales of Renault’s low-cost Dacia are up 18.7% this year at 160k.  Whilst at the other end of the price range, Jaguar sales are up 18.6% at 14k.

This is further evidence for the argument that the profitable ‘middle ground’ of the SuperCycle is disappearing as we transition to the New Normal.  Affordability is now the critical factor in the mass market, whilst niche brands such as Jaguar are clearly focused on the relatively small luxury market.

One of the key reasons is that people’s need and desire to own a car is reducing.  Young people simply cannot afford a car with current insurance costs, even if they have a job.  Whilst ownership rates in the cities are dropping fast.  As the Wall Street Journal notes:

The lines of parked cars in the cities also highlight how the average car is used for only 1 hour per day (based on average UK driving speed of 23.4mph – 37.7kph).  Whilst official UK data shows that average mileage per car has fallen 13% since 1995.

New business models such as Mercedes Car2Go car sharing concept are clearly going to play an increasing role, particularly in cities.  This is bad news for those who still rely on likely GDP growth as a guide to chemicals growth.  Instead, companies are going to have to focus on better understanding trends on the demand side of the value chain.