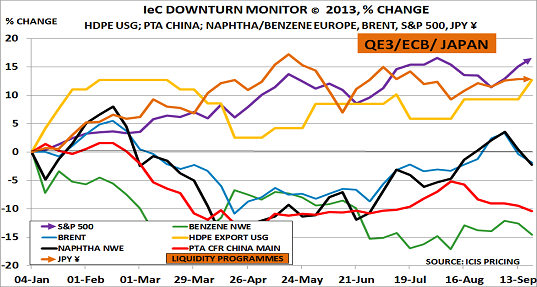 5 years after the Crisis began, there still seems to be a worrying lack of accountability in the banking sector, even when things go wrong on an epic scale.  Take JP Morgan Chase, for example:

Yet whilst there was a management reshuffle, only one senior person seems to have lost their job – and she retired with $21.5m to ease the transition.

Or take the US Federal Reserve as another example:

Yet the Fed is continuing with the same policy, even though it has failed to deliver the promised results for 5 years.

It is hard to imagine that this lack of accountability would be tolerated in any other industry.

The Fed’s failure is particularly hard to accept.  It was obvious back in March, when chemical demand started to slow again, that the Fed’s policies were continuing to fail.  Yet in June it chose to increase its growth forecast.  And surely common sense would have told the Fed that ageing populations will inevitably lead to slower economic growth?  Older people already own most of what they need, and their incomes decline as they enter retirement.

Bond markets seem to be increasingly aware of this accountability vacuum.  Today’s 10-year interest rates at 2.75% are a long way above their May level of 1.6%.  In turn, housing and auto markets are therefore likely to slow as the supply of cheap credit reduces.  So Q4 GDP growth may well again be lower than the Fed’s forecast.

The blog is equally concerned that 2 of its other ‘butterflies‘ – the German election, and the US fight over the budget/debt ceiling – are also now starting to flap their wings.  Just as a butterfly flapping its wings over the Amazon can cause snow in Chicago, so any of these butterflies has the potential to cause a very cold winter.

Benzene Europe, green, down 15%. ”Demand remained soft and crude oil prices continued to move down”
PTA China, red, down 10%. “Ample offers from traders and slower downstream polyester demand”
Naphtha Europe, black, down 2%. “Tighter supply caused by refinery maintenance has been more than offset by lower naphtha demand, creating oversupply”
Brent crude oil, blue, down 2%.
HDPE USA export, up 13%. “The main problem now is getting any product for export, after production problems at Formosa, LyondellBasell and ExxonMobil”
US$: yen, orange, up 13%
S&P 500 stock market index, purple, up 17%