US jobs report shows 3 million fewer employed than in 2007 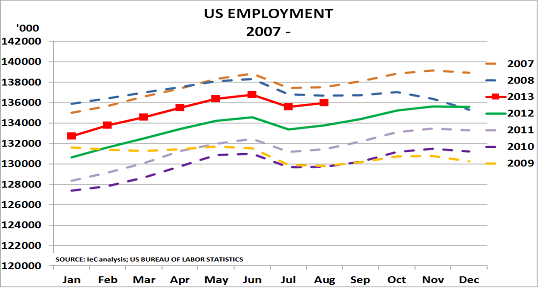 One day, policymakers will accept the obvious truth that economic growth slows in ageing societies as more people enter their low spending and low earning years.   Already, for example, 36% of adult Americans* are in the New Old 55+ generation compared to just 29% in 2000.  And by 2020, there will be 39%.  But the blog isn’t holding its breath that this acceptance will happen any time soon.

Equally, investors will one day stop being “surprised” by economic reports that show marginal differences from month to month.  Of course such “surprises” generate valuable trading revenue for the investment banks.  But they do nothing for future spending power, as the brokerage fees paid for this unnecessary trading activity simply reduce the eventual size of people’s future pensions.

Thus in reality, as the chart shows of US employment, there were no great surprises in Friday’s jobs report:

The critical point is that the total number of jobs has never before failed to grow over a 6-year period since records began in 1939.  Equally alarming is that the underemployment rate (which includes those who want to work, but have given up looking) is still 13.7% – well above the levels normally seen in the past.

Looking ahead, the detail of the report reinforces the blog’s concerns about the underlying health of the economy.  As the New York Times (NYT) notes, it shows that men are dropping out of the labour force, suggesting that construction is now slowing.  This slowdown is likely to get worse as the interest rate for the 10-year Treasury bond has almost doubled since May to 3%.  Soon, the blog suspects, investors will start being “surprised” that this has brought the recent housing recovery to an end.

But it will take longer for policymakers to reluctantly accept they are not superheroes, able to magically restore the economy to growth via the touch of a button on an electronic printing press.  They continue, after all, to ignore the powerfully expressed view of former Fed Chairman Paul Volcker that their prime function is to defend the value of the currency.  So they are hardly likely to want to accept the implications of the NYT’s analysis that “the labor force participation rate remains so low partly because the population is aging“.  Yet having declined for the past 10 years, it is now back at 1978’s level of 63.2%.

The chart shows latest benchmark price movements since January with ICIS pricing comments this week below:
Benzene Europe, down 12%. ”Buoyed by the continued strength of crude oil and energy futures”
PTA China, down 8%. “In India, a 24% fall in the rupee value versus US$ in the past three months, and an expected slowdown of demand from October onwards, have restricted purchases”
Naphtha Europe, up 4%. “Petchem sector demand described as flat, with competition from LPG”
Brent crude oil, up 3%.
HDPE USA export, up 9%. “Mexico’s Pemex increased prices amid supply shortages and a rise in the $US value”
US$: yen, up 13%
S&P 500 stock market index, up 13%

*  Adult defined as over 20 years old