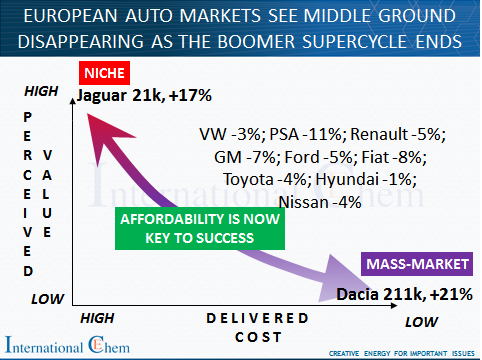 The European auto market continues at 20-year lows, with sales down 4% in January – September.  Whilst September’s sales appeared stronger, up 5% versus 2012, this was only due to Spain and the UK.  Spain boosted volume by 10k due to a €2.7k ($3.7k) government hand-out for people trading in an older vehicle.  Whilst UK volumes were up 40k due to a credit boom in car leasing.

The chart above highlights the key issue, that the profitable ‘middle ground’ has now disappeared.

But now, all the major manufacturers are steadily losing volume and seeing profits disappear:

Dacia is focused on the low-cost end of the market, with selling prices starting at €7k.  It also manufactures on a ‘design to cost’ basis, allowing it to achieve EBIT margins of 6% – twice those of Renault’s other models.  Jaguar is focused on the niche high-end, where it is providing high perceived value for customers.

These trends are now beginning to accelerate.  Europeans, like Americans, have been driving fewer miles/year since the mid-2000s.  The BabyBoomers who led the demand surge in the SuperCycle are now retiring, so their work-related mileage is reducing.  In addition, as Leigh Gallagher shows in her excellent book ‘The End of the Suburbs’, Boomers are increasingly moving back to the cities to be close to friends, family and health/support facilities.

At the same time, as the blog noted earlier this year, BMW research shows car ownership in the critical 20-39 age group has reduced in most of the 12 countries it studied.  High levels of youth unemployment, plus the high cost of insurance, are part of the cause.  But the glamour of car ownership now seems to be disappearing, whilst online services such as Facebook are providing a low-cost way of keeping in touch.

This highlights a key issue for companies’ future planning.  In the past, it was assumed that demand for cars would always increase.  But now it is becoming clear this judgement confused demand for mobility with demand for cars.

Similar mistakes have been made in the past, of course.  Older blog readers may remember using slide rules in the classroom and the workplace.  But this universal tool has now disappeared, as it turns out the market was for calculation instead.

Markets in the future will thus look very different from those of the past, as we discuss in Boom, Gloom and the New Normal.  Companies who adapt to these new developments will likely do very well indeed.  But companies who fail to change may find life very difficult indeed.