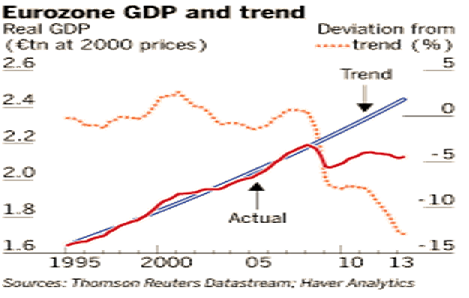 The red line in the above chart from the Financial Times shows how far Eurozone growth has diverged since 2008 from the previous SuperCycle trend (in blue).

Unfortunately, most companies failed to spot what might happen as a result of Europe’s ageing population.  Instead they spent $bns on new capacity in anticipation of a strong economic recovery.   Only now are they beginning to realise how expensive their mistake could prove.

Thus the CEO of major shipping line Maersk has revealed they spent $3.7bn in 2011 on 20 new  container ships for the Asia-to-Europe trade route, the world’s busiest.  But today, capacity is 10% above demand, and rates have fallen 30% to less than $1k/container.  Thus he confessed to the Wall Street Journal:

“It’s pretty clear that when we look back to early part of 2011 when these ships were ordered, ours and everybody else’s view on growth was somewhat different than what it turned out to be and therefore the market will not be as quite as big in 2015 as we thought it to be.”

It is, of course, not true that ‘everyone else’s view on growth’ was similar to his.  Sadly, like too many CEOs, he believed the hype from policymakers and the central banks.  A quick read of the first chapters of Boom, Gloom and the New Normal (which began publication in May 2011) might have provided food for thought about alternative views on the outlook for growth.

The chart also highlights how Eurozone GDP is now 15% below its trend-line growth (dotted red line).  Just as first discussed back in December 2008, we have seen an L-shaped recovery.

Sadly Western policymakers still insist their models are right, despite the evidence on the ground.  But at least China’s new leadership are being more realistic, and now accept they will now have lower growth due to the loss of the previous ‘demographic dividend’.  As a leading member of China’s Academy of Social Sciences explained recently ahead of the November plenum:

“Over the past three decades, China’s economy saw an average annual growth rate of almost 10%. There are many reasons for the rapid growth, but a major one was the country’s favorable demographic structure.”