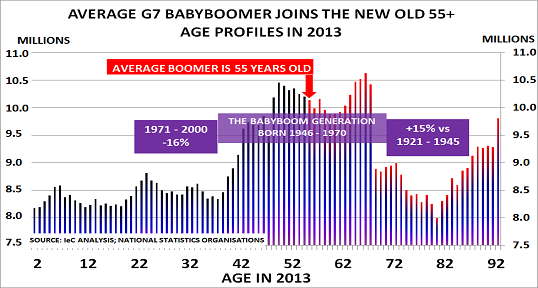 The G7 group of countries are almost half (47%) of global GDP*.  They also have the highest incomes, and are therefore still the major driver for the global economy.  If we understand what is happening to their populations, we have a great insight in the key driver for demand, as we showed in ‘Boom, Gloom and the New Normal’.

The chart above is therefore the blog’s annual update of this key data, showing 2012 births.  It shows this data by age profile, so older people are to the right.

This highlights some important messages:

55 is a key age in terms of demand patterns.  It marks the moment when people’s spending begins to reduce, as they already own most of what they need, whilst their incomes reduces as they move into retirement.

In the past, of course, this cohort was not of great importance to the wider economy.  Even in the G7, life expectancy was only 66 years as late as 1950.  In the emerging economies it was only 44 years.   And generally speaking, people’s needs were very limited in their last few years of life.

The good news is therefore that life expectancy in the G7 has now risen dramatically to around 80, and to around 70 in the emerging economies.  This is a truly dramatic achievement.  But it also means a large number of people are now in the New Old generation for the first time in history.  And whilst their needs are larger than in 1950, they still represent a replacement economy and have to depend on pensions when they retire.

Increased life expectancy is a fabulous benefit.  But it has been accompanied by a similarly major fall in the number of babies being born to the average woman.  So today’s ‘population explosion’ is in fact a ‘health explosion’.

Demographics drive demand.  Today, around 40% of the G7’s adult population is thus in the New Old generation, and in their low-spending years.  This means economic growth will remain slow for decades to come.  Smart companies will instead focus on the new demand drivers of age and income, if they want to maintain growth for the future.