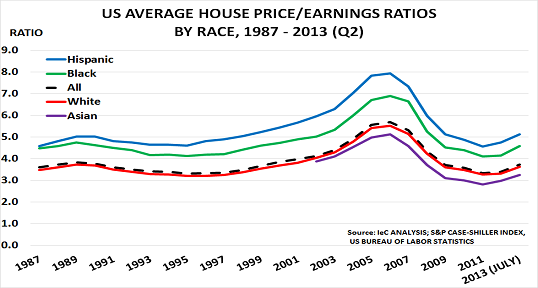 Affordability is the key factor in today’s markets.  And nowhere is this more true than in US housing.  The subprime lending boom of the early 2000s is now long finished.  And US GDP growth averages just 1.7% since 2000.  So understanding the detailed picture of income levels is becoming critically important for forecasting future demand.

Housing used to be the largest market for chemicals and plastics in the subprime period, when housing starts reached 2.2m/year.  Each new house is worth $15k of sales according to the American Chemistry Council, making today’s market worth only $14bn compared to its $33bn peak.  Thus it is clearly important to understand how affordability is likely to impact future demand.

Sadly, US income levels are still very dependent on race.  Thus as the chart shows*, Hispanics (blue line) are least likely to be able to afford a new house, whilst Asians (purple) are best placed:

Interestingly, these ratios are very close to those in the pre-2001 subprime boom period.  These averaged 4.9x for Hispanics, 4.4x for blacks, and 3.5x for whites, with an overall average of 3.5x (BLS Asian data only starts in 2002). 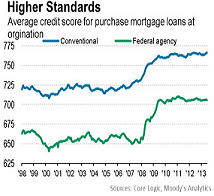 This might suggest that the future will be similar to then, and that the market would be driven by the needs of the 87m white and 5m Asian households.  Without subprime lending, the 15m black and 15m Hispanic households would probably find it more difficult to buy, given their average lower incomes.

Certainly the change in credit standards for mortgages would support this argument.

As the chart from the Wall Street Journal shows, required credit scores have risen since the Crisis began.  Equally, they are harder to earn with unemployment rates higher.

AGEING BABYBOOMERS ARE MOVING OUT OF THE SUBURBS
However, there is also another dimension to the question, namely age range:

This suggests instead that the future is most unlikely to repeat the pre-subprime period, when Boomers of all races were in their prime house-buying period.  Indeed, survey data already suggests that there is a drift back to the cities from the suburbs, as older people want to be closer to health and other facilities.

Thus home ownership rates are already in long-term decline, back at 1995 levels, having peaked almost a decade ago.

Equally important is that 36% of young adults in the 18-31 year-old range are still living with their parents for affordability reasons.  Their unemployment rate is double the national rate of 7.3%, whilst those with degrees find it difficult to save for a deposit due to high levels of student debt.

As the chart from the New York Times shows, this is adding to the decline in household formation.  It peaked in the late 1980s, as the Boomers set up home.  But the false boom of the subprime period has now disappeared, with levels now below 1m/year.  Instead, home ownership rates have now moved into long-term decline.

The recent ‘recovery’ has thus been investor-led, with half of all homes purchased for cash.  Today’s higher interest rates thus mean it has probably already peaked.

Instead, companies need to revisit their now outdated views of how the urbanisation megatrend will develop.  Income levels and age range are likely to be critical factors in determining the products and services that people need and can afford to buy.

* Based on the S&P Case-Shiller US average home Index, and Bureau of Labor Statistics (BLS) data

Anyone not closely studying trade data is likely to make some very expensive mis...

The red line in the above chart from the Financial Times shows how far Eurozone ...