Most major financial markets have doubled since 2009 lows 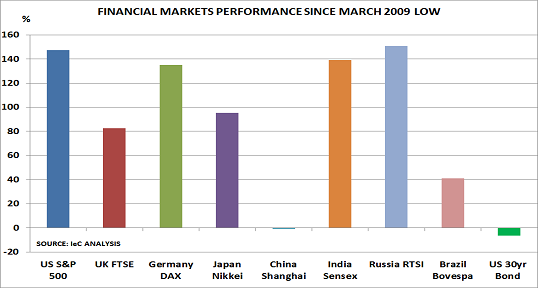 The period since March 2009 has been a wonderful time for most investors in the major markets.  As the blog’s 6-monthly update shows, almost every index has increased, and by large amounts:

Funded by free cash from the central banks, investors have focused on buying.  Bad news has always been good news for them – if economic data disappoints, then this simply means the free cash will continue for longer than expected.  And there is no doubt at all in their minds that a strong global economic recovery is inevitable.

Only two markets have spoiled the party – China, down 1%; and the US 30-year Treasury bond, down 7%.  China initially recovered strongly in 2009, but enthusiasm for its massive borrowing bubble soon ended.  The market was up 56% by July, but this proved its peak.  Since then, it has steadily fallen back, and has now given up all its gains.

Even more interesting is the 30-year bond.  Interest rates at first rose strongly, as investors assumed there would be a V-shaped recovery.  But as they become less confident, so yields began to fall, as the value proposition of ‘return of capital’ increased in appeal.  By July 2012, yields had almost halved from their 4.75% peak to just 2.5%.

These moves give pause for thought.

If China was really going to lead the world out of recession, its stock markets ought to have done better.  Instead, the money from its lending bubble has focused on property investment, where prices relative to average earnings are now twice those seen at the height of the US subprime boom.

Equally, the recent rise in US 30-year yields, now back to 3.75%, is already slowing key interest rate sensitive markets such as housing and autos.

Even more importantly, chemical markets – long the best leading indicator for the real economy – are highlighting major problems ahead.  Week after week, we read the same reports of abundant supply and weak demand, as the performance of the benchmark products in the IeC Downturn Monitor shows.

Ironically, the US is the only exception.  It should be using its shale gas advantage to gain market share via lower prices.  But ongoing plant problems mean it has instead struggled to supply existing demand.

Latest benchmark price movements since January with ICIS pricing comments this week are below:
Benzene Europe, down 17%. ”Domestic supply remains ample, while demand is slower than expected”
PTA China, down 11%. “Most market players have a bearish market outlook because of ample supply and an expected slow recovery of downstream polyester demand amid the weak macroeconomic environment”
Naphtha Europe, down 5%. “Independent stock data gathered at the Amsterdam-Rotterdam-Antwerp hub reveals naphtha stocks at the ports have risen sharply this week”
Brent crude oil, down 3%.
HDPE USA export, up 16%. “Pricing has risen for 3 weeks following news of two simultaneous force majeure declarations”
US$: yen, up 11%
S&P 500 stock market index, up 15%