Home Blogs Chemicals and the Economy “2 Steps and Then a Stumble”, as the Fed starts to taper

“2 Steps and Then a Stumble”, as the Fed starts to taper 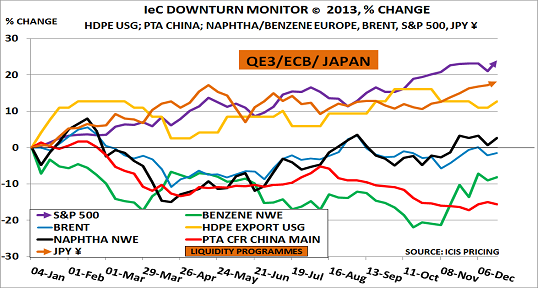 The most important event of the past week, and possibly of the whole year, was Wednesday’s decision by the US Federal Reserve to finally “taper” its vast stimulus effort – now worth $4tn, nearly 25% of US GDP.

The timing was no great surprise.  The blog was convinced Ben Bernanke would want to start the process before he retired as Chairman in January, and had given its view to ICIS news back in September, when the taper was originally postponed due to the debt crisis:

“Paul Hodges, chairman of consulting firm International eChem and an ICIS blogger on economics, shares the view that on-going policy uncertainties made the Fed reluctant to throttle back on its bond buying.  “I suspect that the potential problems over the debt ceiling and the budget may well have been a key influence in the decision to postpone tapering,” he said.  “My guess is that Bernanke wants to set the process in motion before he retires in January, but he probably feels that it would be best to wait for a politically quieter time to begin,” Hodges said”

The key now is to prepare for what happens next.  We can already see prominent commentators lining up to promote what one might call the Recovery Scenario.  Thus the new editorial director of The Economist Intelligence Unit wrote to their clients as follows:

“As we look towards 2014, however, the global outlook will improve, with the US, Japan, the euro zone and even the UK all set for the first synchronised growth acceleration since 2010. Moreover, unlike in 2010, when growth was partly driven by government stimulus in many countries, in 2014 the debate in the rich world will increasingly turn to how to wind back the unorthodox and emergency post-financial crisis policy measures.

“Moreover, despite the economic travails since 2007, 2014 will also see exciting market opportunities continue to develop. Key among these will be urbanisation in the emerging world, which will accelerate, unleashing new consumer power–particularly female spending–and transforming societies. Linked to urbanisation and also to watch will be the continued march of the middle class in the emerging world, not least in Asia and Africa. There is thus much to look forward to. ”

We all hope this optimism might be justified.  But this will now be the fifth New Year at which the experts have announced that the Recovery Scenario is about to happen, and so experience teaches the blog to be more cautious.

Its own view is that euphoria will likely continue for a while, and that the new Fed Chairman, Janet Yellen, will announce another $10-$15bn “taper” in Q1.  This will also be met with great excitement by the investment community.  But then reality will start to dawn, that central banks have not dealt with the real issues slowing the global economy, which are the focus of what one might call the Demographic Scenario.

At this point, we will all be reminded of what used to happen during the SuperCycle, when central banks would start to raise interest rates as the economy over-heated.  The first 2 rises were seen as incredibly positive, and signs that policymakers were going to arrange a “soft landing”.  But then it would become apparent something worse was going to happen after all.

The phrase use to describe this process was “two steps and then a stumble”.  If history is any guide, companies might well benefit from developing their Demographic Scenario in advance, even whilst they hope that the Recovery Scenario might finally be about to come true.

The weekly look at benchmark price movements since January 2013 is below with ICIS pricing comments, and the 2013 chart of price movements above:
PTA China, red, down 16%. “Prices declined, undermined by weak downstream polyester demand approaching the financial year-end.”
Benzene Europe, green, down 8%. ”Steady upward movement on pricing, driven by gains in global markets and a continued pull on domestic volumes from abroad”
Brent crude oil, blue, down 2%
Naphtha Europe, black, up 3%. “High demand from the Asian petrochemical sector, but domestic demand has weakened in the approach to the holiday season”
HDPE USA export, orange, up 13%. “With prices in Asia moving lower, US material was not as competitive”
S&P 500 stock market index, purple, up 18%
US$: yen, brown, up 24%

PREVIOUS POST The trend is your friend, until it isn't
NEXT POST China auto sales could drop if lending squeeze continues