Home Blogs Chemicals and the Economy Four things we think we know, but probably don’t

Four things we think we know, but probably don’t 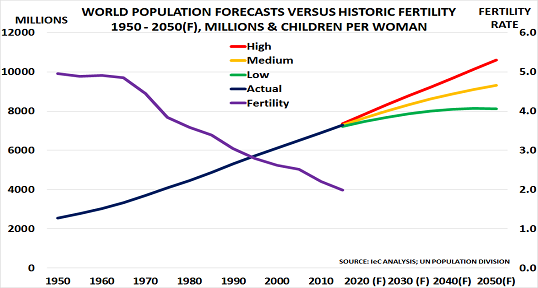 Knowing that we don’t know something makes us uncertain and cautious.  If, for example, we come to a dangerous corner in the road when driving, we see the sign and slow down.  Its when we are driving on a bright winter morning and don’t look for the ice under the trees that we end up in the ditch.

As we approach the end of the year, the blog would like to present 4 critical issues where we think we know the answer, but probably don’t:

HOW LARGE WILL THE WORLD POPULATION BE BY 2050?
Everyone thinks they know the answer to this question.  We all believe that the population is rising fast.  Conferences are often held with the titles such as ‘9 Billion People by 2050’.

But the real answer is that we don’t know.  The chart above gives the official forecasts from the UN Population Division 5-yearly report in 2010:

But look at the purple line for a moment.  That shows the steady decline since 1960 in the number of children being born per woman.  It is now close to the population replacement level of 2.1 children.  And recent data shows no overall sign of this decline slowing.

Heroically, however, as the UN makes clear in its methodology, all 3 of its Scenarios assume that this trend will now reverse – either immediately or more gradually.  And, of course, it may well be right.  But even its own estimates under this methodology give very different results.  A difference of 2bn people within the space of the period from now to 2050 is a fairly wide margin of error!

And what happens if today’s trend for lower fertility continues?  It has been falling at an annual rates of 1.2% since 1950.  Could it continue to fall at this rate?

In Africa, for example, the UN assumes that today’s 4.9 level will fall to at least 3.4 in its High Scenario, and to 2.3 in its Low Scenario.  They base this on the assumption that African women are following trends already seen everywhere else in the world.

But this assumption then forces us to make another assumption, if we want to believe that the global population will continue to rise – namely that enough women somewhere else will start having more babies to compensate.

Maybe they will, maybe they won’t, the blog hears you saying.  But what if they instead follow the lead of Asian women, particularly those in North East Asia, where rates fell in a straight line from 5.28 in 1970 to 1.11 today?  They didn’t stop at the magic 2.1 replacement level.

If this became the norm, then the global population could instead be in steep decline by 2050.  What would this then do to demand forecasts?

The simple fact is that we don’t know.  After all, even if we correctly forecast fertility rates, we still have to guess right on life expectancy.  Or to put it another way – did anyone back in 1950 forecast that global fertility rates would halve to 2.5 children per woman today, or that life expectancy would rise 50% to around 70 years?

Knowing that we don’t know something of course leads to uncertainty.  And human beings don’t like uncertainty.  But uncertainty can also be a good thing if it leads us to watch for the patch of ice ahead that will take us into the ditch.

This is the New Normal in action, where we need to become prepared for whatever outcome develops by challenging accepted thinking as hard as we can.

Tomorrow’s post will look at another critical area of business, where we all think the answer is obvious.

The weekly look at benchmark price movements since January 2013 is below with ICIS pricing comments:
PTA China, down 15%. “Price increases were limited, curtailed by softer downstream polyester sales in China during the week”
Benzene Europe, down 9%. ”Domestic sentiment buoyed by ongoing production outages limiting feedstock availability”
Brent crude oil, down 2% . “Asian naphtha market is keen to purchase as much European product as possible because of fears over shipment delays on other routes”
Naphtha Europe, up 1%
HDPE USA export, up 11%. “Not yet seen any evidence of the typical slowdown in advance of the Chinese Lunar New Year holiday”
US$: yen, up 17%
S&P 500 stock market index, up 21%

PREVIOUS POST US New Old 55+ generation makes major move back into the workforce
NEXT POST Can oil prices stay at $100/bbl forever?