Home Blogs Chemicals and the Economy US polyethylene and PVC exporters focus on margin, not volume

US polyethylene and PVC exporters focus on margin, not volume 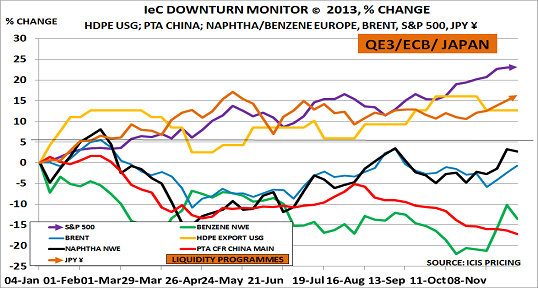 2013 has seen 3 types of markets develop for the blog’s IeC Downturn Monitor portfolio as the chart above shows:

The anomaly has been US polyethylene (yellow), where prices have stayed relatively strong as producers chose to focus on margin rather than volume. 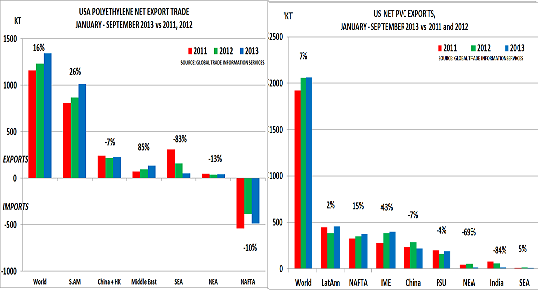 This might seem a strange decision, given they enjoy a major feedstock cost advantage on ethylene due to shale gas.  But it makes perfect sense when seen against the limited potential for selling additional export volumes.  As the charts above show, based on trade data from Global Trade Information Services, there is really little scope for selling more PE or PVC (the main derivatives):

This message does not yet seem to have got home to investors.  They look at the raw data, and see just rising volumes and high margins.  So they imagine that the world, and Asia in particular, are just waiting for additional volumes to appear.

What they miss is that Asian and LatAm countries are busy expanding their own production as fast as possible, so as to create jobs.  They also forget that China’s slowdown is also now impacting Latin America’s demand.  Equally, they overlook the fact that Brazil’s vast increase in PVC imports (double 2011 levels) and in PE (up 34%), is mostly a one-off bonus due to preparations for the soccer World Cup and the Olympics.

The operating managers with whom the blog talks understand all this very well.  Some have special grades of PE that currently cannot be supplied by domestic competition in the importing countries.  But most appreciate there is little point trying to sell additional volume, as this would merely lead to a price war and lower margins.  They also know, unlike investors, that exporting additional volumes – if major new capacity is built – will be very hard indeed.

PTA China, red, down 17%. “Downbeat market outlook for the downstream polyethylene terephthalate (PET) and polyester fibre demand”
Benzene Europe, green, down 14%. “Players are generally in the midst of running down inventories ahead of year-end rather than building stock.”
Brent crude oil, blue, down 1%
Naphtha Europe, black, up 3%.  “European arbitrage window to Asia is well and truly shut, but domestic petrochemical demand will continue to prop up prices as crackers minimise the use of the more expensive alternative feedstock propane”
HDPE USA export, yellow, up 13%. “Limited trade in the week shortened by the US Thanksgiving holiday.
US$: yen, orange, up 16%
S&P 500 stock market index, purple, up 23%