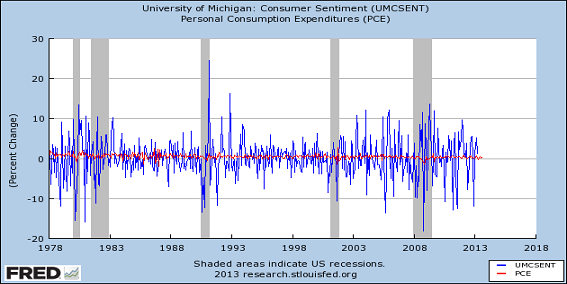 There was an interesting discussion at our annual conference last week about the relevance of correlation statistics.  The general view was that anything less than 90% wasn’t really worth bothering about, as the number of errors would be too great.

Thus the blog was very amused to see Neil Irwin in the Washington Post writing about the major US confidence indicator (hat-tip FT Alphaville).  He has checked back to see the correlation between the University of Michigan Consumer Sentiment indicator and actual consumer spending.

This is an indicator that has been produced since 1978.  And it is routinely used by US government and Federal Reserve officials to forecast consumer spending, as well as being cited each month in most mainstream media.  Consumer spending is, after all, the most critical economic variable as it is 71% of the US economy.

There is just one problem, as Irwin notes in discussing the chart above:

So there we have it.  Policymakers happily spend their time studying the Confidence Indicator, and using it to draw conclusions about the outlook for the economy.  They have never thought to test its predictive power.  Yet they choose to ignore demographics, which has to be the key driver of demand.

Chlorine and caustic soda are some of the most widely used chemicals.  Thus th...

US polyethylene and PVC exporters focus on margin, not volume

2013 has seen 3 types of markets develop for the blog’s IeC Downturn Moni...