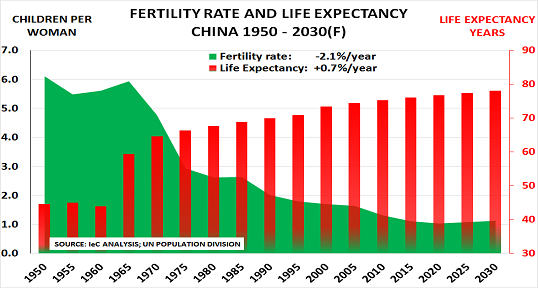 October’s post ‘Women now have half the number of children compared to 1950‘ attracted great interest amongst blog readers from around the world.  It highlighted how global life expectancy has risen 50% since 1950 to average 70 years.  Over the same period, the average number of children being born has halved to just 2.5 per woman.

It thus suggested today’s ‘population explosion’ is in reality a ‘health explosion’.  The great benefit of increased life expectancy means women don’t have to have children every year, in order to ensure the family will earn enough to survive.  So they are free to do other things with their lives, such as go back to work after childbirth.

During December, the blog will therefore look in more detail at the position in the world’s 5 largest economies – USA, China, Japan, Germany and France.  Combined, these are half of the global economy ($36tn).

It starts today with China, which has the world’s largest population with 1.4bn people.  China has become the manufacturing capital of the world over the last 15 years.  But the future looks very different, as 450m people (41% of the adult population) will be in the New Old 55+ generation by 2030.  The chart above shows the background to this startling change:

Clearly China’s ‘One Child Policy’ has been part of the reason for this collapse.  But the same phenomenon has also been seen across North East Asia (NEA):

Thus although China’s policy is now being slowly repealed, it may not lead to many new babies being born.

This, of course, matters enormously for future growth.  Simply maintaining the population level requires women to have an average of at least 2.1 children.  So NEA populations are therefore certain to decline at today’s fertility levels.  Equally, their ageing populations will inevitably spend much less than when they were younger:

China, however, has an even more serious problem looming, as the latest OECD Pension Handbook shows, due to its lack of Western-style pension and social security provision.

Its basic pension pays just 1% of average individual/province earnings for each year of coverage, subject to a minimum 15 years of contributions.  So 30 years’ employment provides a pension of just 30% of this average wage.  Some employees also pay 8% of their wages into a retirement fund and receive top-up annuities based on individual savings – but this only covers 210m urban employees.

The numbers tell the story of this dramatic turnaround:

Just imagine the challenge this poses for the new government.  It aims to refocus growth on domestic consumption, and away from exports and infrastructure spend.  Yet as the OECD reminds us, China’s average earnings are just $7500 (versus $42500 across the OECD).  So 30 years employment gives a pension of just $2250, plus annuity.

So how will all these New Old  – 250m people today, 450m by 2030 – afford to buy lots of consumer goods and services?  Almost certainly, China’s population is going to get old before it gets rich.

At least the new government understands the issue.  As premier Li noted in October, its priorities include increasing investment “in areas such as pension and health services, as people can currently wait 30 or even 40 years for a place in a state nursing home.”

But many Western and Asian companies have failed to recognise the criticality of this issue.  They imagine China is about to become a thriving middle class paradise – a mix of Manhattan, Knightsbridge and the Ginza rolled into one.

Reality is rather different.  Those companies who provide affordable basic products and services will do very well.  Others will find business very difficult, as yesterday’s demographic dividend turns to tomorrow’s demographic deficit.

PREVIOUS POST US polyethylene and PVC exporters focus on margin, not volume
NEXT POST BMW says "pay to use" models will challenge US auto industry