EU auto sales slide for 4th year in a row 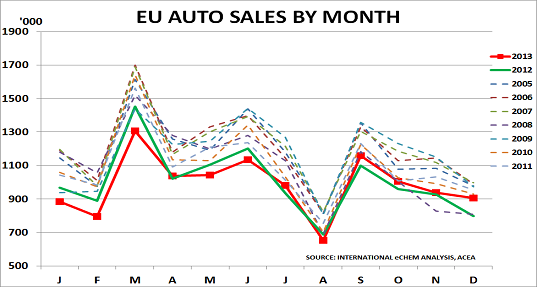 Final data for EU auto sales has now been published, and is summarised in the chart above:

The 3% increase in Spain was due to yet another ‘cash-for-clunkers’ programme by the government.  Desperate to boost consumer spending and revive manufacturing, they are offering €1k ($1.3k) for every 7 – 10 year-old car that is scrapped and replaced by a new car costing less than €25k.

The reasons for the UK’s 11% increase were more complex:

Clearly these extra sales are a one-off event.  They will also presumably lead to lower sales in the future when the claims payments cease, as by then most adults will have replaced their old car with a new one.  And at the moment, it is hard to see what might happen in the rest of Europe to balance these lower UK sales.