US new car sales at highest level since 2007 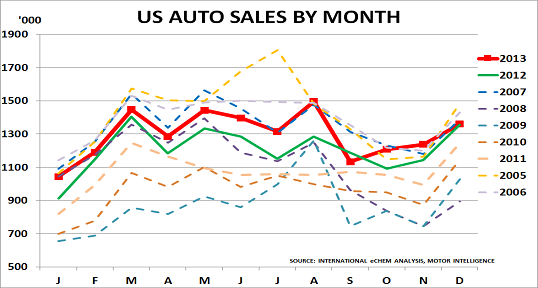 The good news about US auto sales is in the chart above.  It shows:

Unsurprisingly this has led many to believe that the crisis is now over, as far as car sales are concerned.  Their only question is how high volumes can go this year, with GM forecasting a further rise to 16 – 16.5m sales in 2014.

The truth seems more complex, however:

This matters because, of course, the used car market is far larger than the new car market.  Even more important is that the US auto fleet has been in decline since 2008 when it was 137m vehicles, versus 126m in 2011 (latest data).

In addition, the average age of the auto fleet is continuing to increase.  It was 11.4 years in 2013 according to Polk, an increase of 3 years since 1995.  This is partly due to improvements in manufacturing.  But it also relates to the fact that Americans are driving fewer miles each year.

Nobody knows how these trends will play out in the future, as they represent a New Normal.  But companies that read-test their strategies against several different Scenario, will likely be far more successful, than those who simply assume the good times will now roll on forever.