2013 a bad year for force majeures 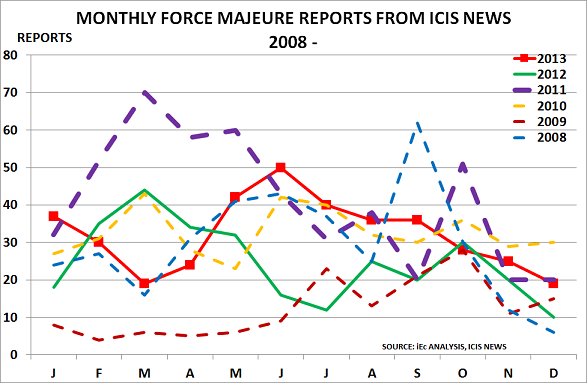 This is a worrying performance, given that the industry has been profitable over the period.  This meant there was very little excuse for companies not spending the necessary money on maintenance.  And, of course, the tools for improving reliability have been improving all the time.

Even more concerning, as the chart shows, is that force majeures in 2013 (red square) were above 2012 levels from May onwards.  They also reached a record high in the June – August period, and were close to previous peak levels for the rest of the year.

Companies may well come to regret this short-sighted attitude.  During periods of good profitability, customers usually don’t have too many choices.  But when demand slows down, as seems likely in 2014, then reliability becomes a critical factor for them.

Equally, companies who have economised on maintenance during the good times, will find it more difficult to increase their spending when profits slow.  Whilst their lower reliability will make it more difficult for them to exploit the opportunity to operate successfully during upturns.

In addition, of course, there is the core issue of safety.  Poor maintenance and lack of training has a direct correlation with an increase in safety incidents.  This can not only lead to tragic consequences, but also threaten a company’s license to operate.