Sentiment weakens as US stock markets wait for more QE 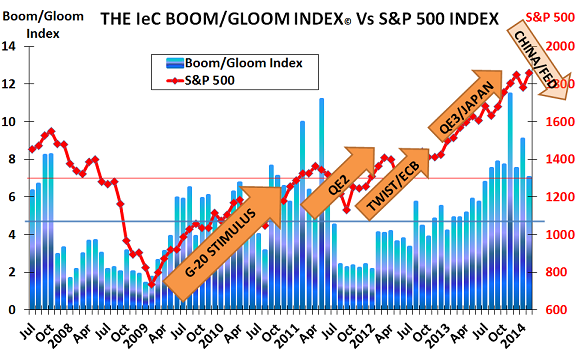 Sentiment, as measured by the IeC Boom/Gloom Index has weakened considerably over the past 3 months as the chart shows:

This type of divergence is often an indicator that a long-sustained market move is coming to an end.  And certainly this move has been underway since 6 March 2009, so it might be considered overdue for ending.

Plus there are other signs that the great stimulus-inspired market boom is losing strength:

Nobody quite knows why this happened, but sudden moves like this are usually signs of bigger shifts underway in the tectonic plates of the global economy:

Against this background, Wall Street has begun to assume that new Fed chairman, Janet Yellen, will soon realise the economy is not as robust as had been assumed, and will quickly resume the QE stimulus programme.  And they may well be right about this.

But the scale of the stimulus in China has been more than twice as large as that in the US, as discussed in the blog’s new Research Note.  So changes in China’s policy will likely have a much grater impact than anything that Yellen does in the near-term.

This may be what the divergence between the Boom/Gloom sentiment index and the S&P 500 is trying to signal.  As the New York Times warns: “No doubt, the International Monetary Fund would get involved, but addressing a market panic reaching from Rio de Janeiro to Beijing would be the most complex of tasks.”

Benchmark product price movements since January 2013 are below, with ICIS pricing comments:
PTA China, down 25%. “Both PTA and downstream polyester producers in China are sitting on high inventories because of slow demand”
Benzene, Europe, down 6%. “The market remains fundamentally sluggish due to limited downstream demand”
Brent crude oil, down 2%
Naphtha Europe, down 1%. “Surplus cargoes are being absorbed by the US gasoline sector”
US$: yen, up 16%
HDPE US export, up 18%.  “Prices moved up slightly, based on limited availability and feedback from traders about targeted prices from producers”
S&P 500 stock market index, up 27%