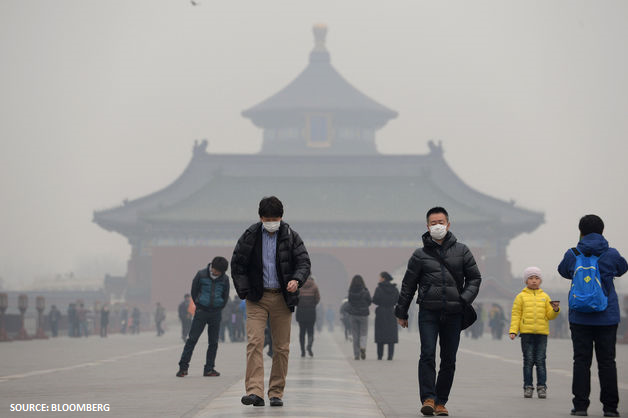 Chapter 6 of Boom, Gloom and the New Normal in October 2011 was one of the first detailed analyses to highlight the way in which pollution was rapidly moving up the political agenda in China.  Controversial at the time, it warned:

“Recent growth in China and India has come at a price: Poor air quality, chronic water shortages and deforestation.”

Since then the problems have worsened, to the point where almost everyone now agrees that they are creating a major political problem.  The new leadership simply has to solve this, if it wants to remain in office.  Beijing and the 6 northern provinces have now been shrouded in smog for 6 days, and on Wednesday the US embassy reported that the levels of PM2.5, the small particles that pose the greatest risk to human health, were “beyond index” at 512.

The World Health Organisation recommends day-long exposure levels of no more than 25.  Yet Bloomberg reports that the level has been above 150 since 19 February.  And next week, of course, sees the start of the annual meeting of the National People’s Congress in Beijing, where the problems are certain to receive major attention.

Of course, these problems are not unique to China at its stage of development.  As the blog noted a year ago, pictures of the its smog today mirror those seen in the West until the 1960s, when governments finally began to recognise that economic growth was unsustainable if it meant millions of people died as a result.

This highlights how policies have to change.  Shanghai’s Academy of Social Sciences yesterday reported that Beijing is”almost uninhabitable for human beings“.  Whilst Beijing has established an official body to co-ordinate the emergency response to severe air pollution as China Daily reports:

“The agency advised children and the elderly to stay indoors and to wear masks when going out. It also urged residents to take public transport and reduce driving. The agency urged middle schools, primary schools and kindergartens to reduce outdoor activities.”

The good news is that the smog is expected to finally lift over the next few days as a cold front comes in to clear the air.  But Beijing residents know it will not be long before the problems re-emerge.  And as the blog noted in its recent Research Note, the problems will get worse, not better, until the polluting factories are closed down and vehicle pollution reduced.

Even more worrying is new research from China Agricultural University‘s College of Water Resources and Civil Engineering, which suggests that if the outbreaks of smog are allowed to continue, Chinese agriculture will suffer conditions “somewhat similar to a nuclear winter”.  They suggest this is a further threat to China’s food production, and claim to have:

“Demonstrated that air pollutants adhere to greenhouse surfaces, cutting the amount of light inside by about 50% and severely impeding photosynthesis, the process by which plants convert light into life-sustaining chemical energy”.

Thus it is no surprise to find that President Xi has now decided to take up the subject personally.  Speaking after a well-publicised tour through the smog yesterday evening, he called for strengthened efforts to control it saying:

“The priority is to limit PM2.5 by reducing dependence on coal, strictly controlling vehicles, adjusting industry structures, and other measures.”

China is clearly now preparing to shift away from its current ‘growth at any cost’ model of economic growth.  This must result in a major slowdown, as it will take time to build the new, less-polluting, factories and power stations.  Car ownership must also move down the priority list.

US housing recovery stalls as Boomers head for retirement

“Recent economic reports suggest a bleaker picture for housing…. So...

2013 a bad year for force majeures