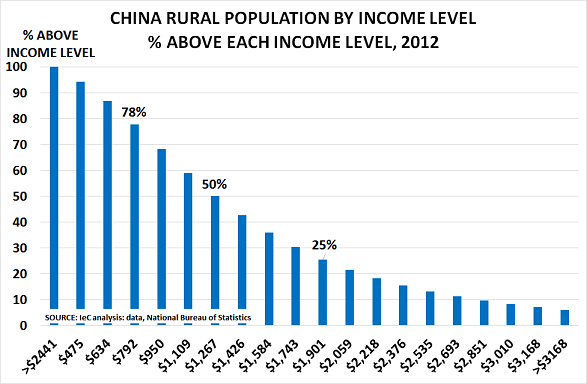 Average incomes in China are very low by Western standards, and certainly not “middle-class” as the blog discussed yesterday.  It is also easy to forget that almost half the population still lives in rural areas.  Official data shows their incomes have shown major growth over the past 20 years, but are still less than a third of urban incomes today.

Consumption patterns for food, housing, transport, education etc follow the same patterns as for urban areas. But absolute values are much lower..  Average total consumption expenditure in 2012 was just $936 per capita.  In terms of durable consumer goods, this means:

By comparison in urban areas:

This comparison identifies the real markets for companies aiming to target the 642m people living in rural areas.

Of course there are wealthy people in rural areas.  But there are not enough of them to form more than a niche opportunity.  The real market is thus for $50 refrigerators and similar very basic appliances.

In addition, however, there will be a growing market for environmental improvement.  As Goldman Sachs have noted, most water in N China is not fit for drinking or for agricultural use.  Similarly, the Ministry of Environmental Protection has published a new book warning that:

“One-sixth of China’s arable land — nearly 50 million acres — suffers from soil pollution.  More than 13MT of crops harvested each year were contaminated with heavy metals, and 22m acres of farmland were affected by pesticides”.

The situation is particularly acute in Hunan province, which produces one-sixth of China’s rice and is also a major producer of nonferrous metals.  Pressure to maintain economic growth means that the province is also China’s leading polluter of cadmium, chromium, lead and nonmetal arsenic.

Companies who look through the middle class myth, and focus on these opportunities will be the major winners for the next few decades.