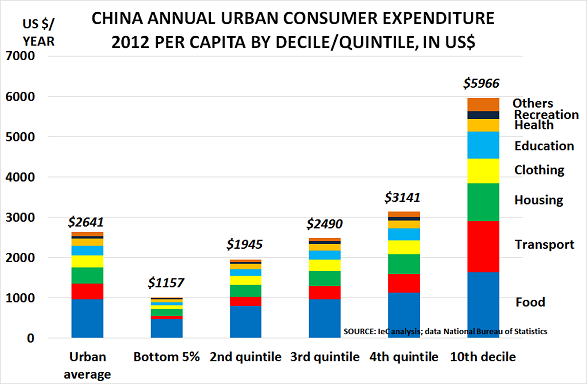 One of the great myths of modern times is that China is now full of middle class people with Western levels of consumption.  Nothing could be further from the truth.

Annual per capita incomes have certainly soared over the past two decades.  But the main impact has been to lift people out of absolute poverty, not to create a middle class on the Western scale.  Official data shows

But clearly, even average urban incomes are nowhere near Western definitions of middle class.

So why has there been so much confusion over this issue? 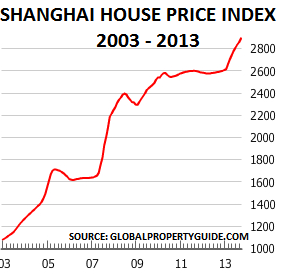 The answer lies in the ‘wealth effect’ that has taken place as a result of the credit bubble.  This has inflated property values to an extraordinary extent, as shown by the Shanghai house price index chart from 2003:

The problem, however, is that wealth effects are essentially Ponzi schemes.  Those who join early get paid out with cash from those who join the party at a later stage.  But eventually economic reality breaks through, as there is nobody left to join.

This seems to be the case in China today:

Clearly these prices are unaffordable on normal calculations of prices versus earnings.  They only work when governments are prepared to supply low-cost credit with few questions asked about repayment, as in the US subprime era.   In China, this ‘wealth effect’ based on a property bubble has meant that millions of urban residents have appeared to become middle-class.

But in a Ponzi scheme, there had to be a new buyer able to afford to buy the property, each time the existing owner wants to cash out.  This becomes impossible once the tap supplying new credit is turned off:

Another concern about the housing market is that ownership is very concentrated, as China Spectator has noted:

This doesn’t sound like a story that will end well, if the new government continues to cutback on the credit bubble.

Instead, consumer demand will be based on the chart above.  This shows government figures for per capita urban consumer expenditure in 2012:

Companies may prefer to believe that the government will ‘blink’ and do another stimulus package soon to maintain the wealth effect.  But it would seem prudent to also develop a Plan B, on the basis that the new leadership will carry through on its policies.

Failing to prepare for this possibility could result in a nasty shock.  China’s economy will be quite different when, not if, urban spending becomes based on income again, and loses the benefit of the wealth effect.