Home Blogs Chemicals and the Economy And now the stumble?

And now the stumble? 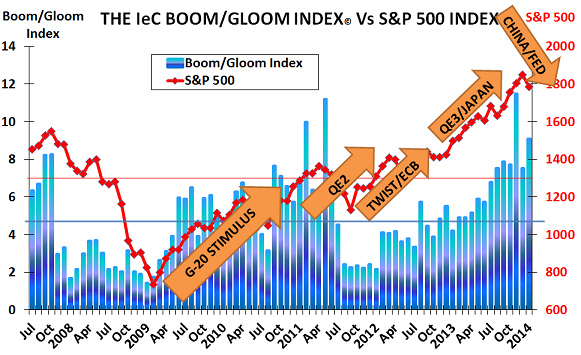 Last week the US Federal Reserve announced the second move in its so-called tapering process, and reduced its bond buying by another $10bn/month.  But there was only a temporary repeat in stock markets of the enthusiastic response to its first reduction in December.  We are thus about to test whether the blog’s theory of ‘two steps and a stumble’ will prove correct.  As it wrote after the first taper:

“At this point, we will all be reminded of what used to happen during the SuperCycle, when central banks would start to raise interest rates as the economy over-heated.  The first 2 rises were seen as incredibly positive, and signs that policymakers were going to arrange a “soft landing”.  But then it would become apparent something worse was going to happen after all.”

“The phrase used to describe this process was “two steps and then a stumble”.  If history is any guide, companies might well benefit from developing their Demographic Scenario in advance, even whilst they hope that the Recovery Scenario might finally be about to come true”.

Indeed, the US market seems to be becoming increasingly nervous about the outlook, despite policymakers’ repeated assurances that a strong Recovery Scenario is virtually assured.  And as we would expect, this nervousness is captured in the IeC Boom/Gloom Index, as the chart above shows:

Thus we are also in position to test another old stock market saying, that January sets the pattern for the year.

The critical question, however, is whether this is just a ‘pause that refreshes’ after a sustained 58% rally since September 2011.  And here the issue is whether ‘something worse’ is going to happen.

Clearly a minor $10bn/month reduction in the Fed’s lending bubble is not going to have a long-term impact.  Most assume that any major fall in US stock markets would immediately cause new Chair Janet Yellen to restore the cut.

However, across the Pacific Ocean, something much more important is happening.  Unnoticed by most media, who remain focused on the Fed, the new Chinese leadership is starting to tackle its own lending bubble.  And this is $10tn in size, not just $10bn..

Of course, most commentators believe that any slowing in China’s growth would immediately cause a new stimulus programme to be announced there, too. But the blog new research suggests this is most unlikely, for reasons it will discuss in a major new Research Note.  It hopes this Note will help readers avoid the dangerous complacency that has developed over the outlook.

Benchmark price movements since January 2013 with ICIS pricing comments are below:
PTA China, down 19%. Market closed for Lunar New Year
Brent crude oil, down 4%
Naphtha Europe, down 2%. “Sentiment in the European naphtha market has weakened as the remaining source of demand – the domestic petrochemical market – cut back on its purchases”
Benzene, Europe, down 3%. “The downstream market struggles to recoup margins amid modest demand levels and bearish macroeconomic signals”
HDPE US export, up 16%. “Very little appetite, even from Latin America at the current price levels.”
US$: yen, up 16%
S&P 500 stock market index, up 22%