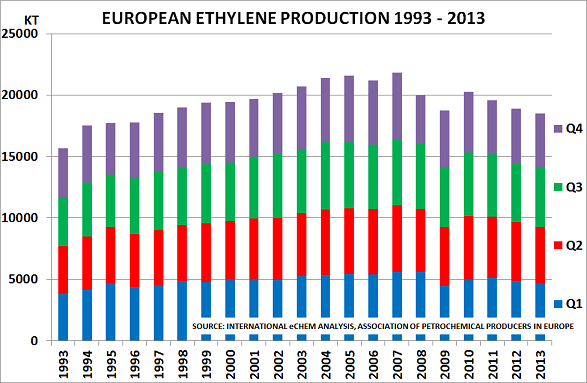 Nobody was expecting very much from Q4 ethylene production in Europe, as several plants had been taken offline in December due to lack of demand.  And yet it is still possible to be disappointed by the actual outcome as reported by APPE.  As the chart above shows:

In fact, the chart gives a clear indication that European ethylene production is now in steady decline.  Operating rates were just 78% in 2013, worryingly close to the 77% seen in 2009.  That might have been seen as a one-off post-Crisis problem.  But data since then suggests a long-term trend is now underway.

Propylene data confirm the miserable picture.  It was the highest since 2010 at 14.6MT, due to changes in severity to maximise output.  But Q4 was weak at 3.4MT, and lower than 2012 as propylene prices came under pressure.

Butadiene was the same story, with output at 1.9MT in 2013 also the lowest since 2009, and otherwise the lowest since 1996.  The lack of recovery in the European car market continues to take its toll, as the blog will discuss later this week in relation to the problems at Lanxess.