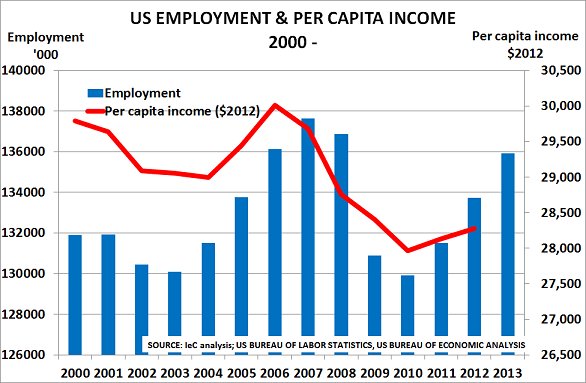 There are two ways to approach last Friday’s monthly release of the US jobs figures:

Last Friday provided a good opportunity for both approaches.

Traders in financial markets took the view that the jobs data was bad, and that a few more months of such data would cause the Fed to move its printing press into a higher gear.  This would mean higher prices for financial assets, and bigger bonuses for traders.

Those looking for clues about real demand agreed that the numbers were bad.  Comparing the trend between December and January, there was a loss of 2.9m jobs, compared to a loss of 2.5m in the same period last year.  In fact, it was the worst swing since 2009, when the economy lost 3.7m jobs.

Even more importantly, we now have 2012 data for per capita income: the chart compares this with the jobs data: 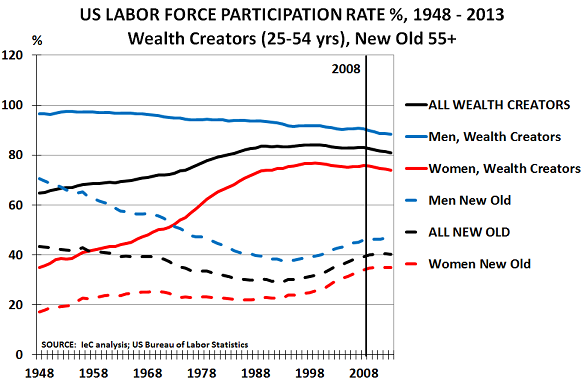 The second chart highlights the key issue, the alarming and continuing decline in employment amongst those in the Wealth Creator 25-54 age group:

This decline in the participation rate is, of course, the major reason why the overall jobless rate has been falling to its current 6.6% level.  People who have dropped out of the labour force don’t count as unemployed in the jobs data.

This makes it all the more surprising that the Fed could possibly consider that its money printing has had any impact on the employment market, one of its twin objectives alongside inflation.

The dotted lines explain why the overall participation rate is falling and is now down to 63% from 67% in 2000:

Common sense would suggest that these issues are far too complex to be solved by simple monetary policy.

Printing money, or reducing interest rates, won’t help Wealth Creators gain the skills they need for employment in today’s economy.  Nor will it help New Olders find a second career to provide extra cash when they find they cannot live on their small pension.

But the Fed has locked itself in a corner, where it would now be too embarrassing to admit its policy has been a mistake all along.  Whist Wall Street doesn’t care, as long as the bonuses continue.