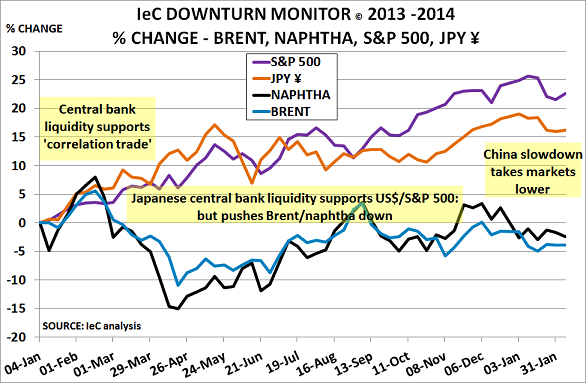 Markets stopped operating in their true role of providing price discovery sometime ago.  Instead, they became dominated by the central banks, determined to prove their theory that increased asset values can stimulate sustained economic recovery.

They, of course, have the firepower to bend markets to their will.  Nobody else could have spent $16tn in this manner over the past 5 years.  And anyone who tried to stand in their way went into bankruptcy a long time ago.

But as the chart above shows, central banks are no longer speaking with one voice:

The correlation pattern seen since 2009 continued into January-February last year.  Thus the US S&P 500 index (purple line); naphtha prices (black); Brent oil prices (blue); and the yen: dollar (orange) all moved up together.

But then Japanese developments changed the game.  Pension funds had no need to buy dollar-based assets in commodity markets if Japan was pushing the value of the $ up, not down.  They had no need for a dollar-based ‘store of value’ anymore.  So naphtha and Brent prices weakened.

More recently, China’s slowdown has caused markets to resume their correlation, but in a downwards direction.

China’s actions are far more important, of course.  As the blog argues in its new Research Note, this could take $tns off the table, and quite quickly.  At the moment, however, the consensus feels this scenario is most unlikely.  Instead, it expects new stimulus to be quickly announced if growth really starts to slide.

The same attitude is taken in western markets.  Thus the bad economic news since New Year has also caused traders to start positioning themselves for more stimulus.  They are confident new Fed Chairman Janet Yellen wants to see stock markets rise, not fall – and will quickly print $bns to achieve this.

So what are those of us living in the real world of supply/demand fundamentals to do as the giants fight each other?

We cannot influence what happens to asset prices as a result of their actions.  We are price-takers in this area, and they are the price-makers.  So we simply have to try and follow what they are doing as closely as possible.

But we also have to keep a sharp eye on developments downstream in key industries.  This will tell us whether the central bank actions are really having any effect on demand – positive or negative.

One thing is however, starting to become very clear.  This is that all the talk in recent weeks of a strong New Year recovery remains just that – talk.  The Financial Times headline last week captured the position perfectly:

Benchmark price movements since January 2013 with ICIS pricing comments are below:
PTA China, down 19%. “Stable-to-soft market conditions because of weak global macroeconomics”
Brent crude oil, down 4%
Benzene, Europe, down 4%. “Market fundamentals were still uncertain at best”
Naphtha Europe, down 2%. “Prices hit 3 month lows this week as slack demand from all three major outlets – European and Asian petrochemicals, US gasoline – depressed the market”
HDPE US export, up 16%. No report
US$: yen, up 16%
S&P 500 stock market index, up 23%