Home Blogs Chemicals and the Economy US PVC exports fail to grow in 2013, despite shale gas boost

US PVC exports fail to grow in 2013, despite shale gas boost 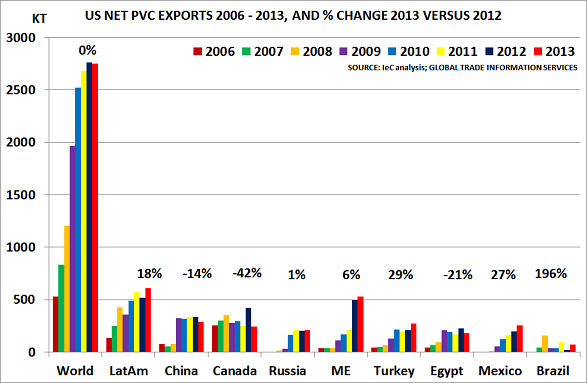 Trade data for net US PVC exports seems to be trying to tell us something very important about the current state of the global economy.  As the chart shows, based on data from Global Trade Information Services:

Another worrying sign was that H1 data had shown net exports up 14% versus 2011.  The slowdown in H2 was thus relatively sharp, with volume at the end of Q3 only up 7% versus 2011.  Two issues thus immediately jump to mind:

Domestic PVC sales have never recovered since the housing crash began in 2006.  But the US was able to maintain production since then by increasing its exports.  These were a third of total production in 2009, but seem to have peaked at 44% in 2012.

Of course, the optimists will still argue that a strong US housing recovery is now underway.  But they have been arguing this since 2008, and the data shows that housing starts are still below the 1 million level, and also lower than any annual level seen between 1959-2007.

PVC is normally a very good indicator of underlying economic conditions.  We can only hope that for some reason the signals today are somehow mistaken.