Home Blogs Chemicals and the Economy “The dog ate my homework”: excuses for economic slowdown

“The dog ate my homework”: excuses for economic slowdown 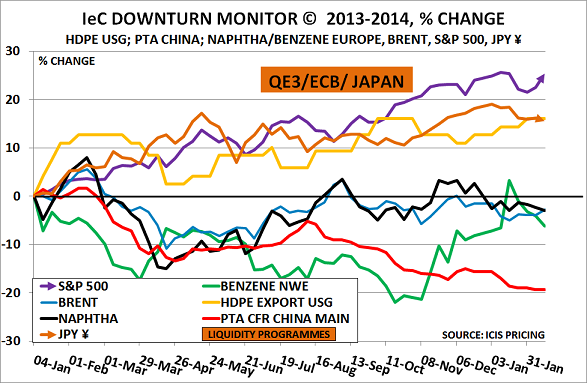 There were never any excuses from policymakers during the BabyBoomer-led SuperCycle from 1983 – 2007.  The Chairman of the US Federal Reserve, Alan Greenspan, came to be styled ‘The Maestro’.  Whilst the Governor of the Bank of England argued that his efforts had created the NICE decade of Non-Inflationary Constant Expansion.

Central bankers came to be seen as wise and far-sighted geniuses who had created the perfect economic world.

Today, of course, the flip side of the story is playing out.  The combination of longer life expectancy and lower fertility rates means the BabyBoom is now a distant memory.  Instead, the economy is inevitably slowing as the ageing Boomers reduce their spending and lead us into deflation.

In response, policymakers are suddenly very keen to find excuses for the failure of their policies.  It would be too embarrassing to simply accept the argument of the Demographic Scenario that it is demographics, not money-printing, that drives demand.  And after 5 years of practice, they are now very quick to offer new excuses for the non-arrival of the Recovery Scenario they continue to forecast so confidently.

Today, its the weather.

Those of us in the UK have seen this excuse before.  It was, after all, our railways who discovered one autumn that delays were due to “the wrong kind of leaves” falling on the track.  Thus it is no surprise to find new Fed Chairwoman Janet Yellen telling Congress last week:

Of course, it has been very cold in the US, and very wet in much of Europe.  But if a Recovery was really underway, US consumer data would simply be less strong, not weak as it is today.  Most economists, after all, expect the weather to cut just 0.3% off GDP growth.  Instead, it is clear that more important forces are at work:

Of course, it is unfair to blame central banks for all the problems.  Common sense suggests that printing money cannot compensate for a lack of babies.  The real issue is the lack of leadership from politicians, who refuse to confront the issues created by today’s rapidly aging population.

Instead we have a set of predictable excuses about why their policies are failing.  It reminds the blog of being back at school, when pupils would try to excuse their failure to finish homework.  The only difference is that a child who suggested “the dog ate my homework” was put into detention – not rewarded with a key role in economic policy.

Across the other side of the world in China, however, things are beginning to change.  Politicians there have realised they have no choice.  They simply have to deal with the impact of these unprecedented demographic changes.  Thus its economic reports for January show the economy heading in a different direction:

The chemicals markets remains the best leading indicator that we have.  As the chart above shows, pricing for the benchmark products remains weak outside the US, particularly in China (red line).  This is confirming demand is very slow – yet seasonally this should be the period when consumers are running flat out to meet demand for the spring.  In Europe, for example, Nel Weddle reported for ICIS on Friday:

“Demand for ethylene’s main derivative polyethylene (PE) has been described by a couple of players as “a disaster” and “not brilliant” and others simply say that they mirror that sentiment.”

Even more importantly, the Chinese market is failing to see any upturn after Lunar New Year.  Instead, local producers are cutting prices to move inventory.

The blog continues to believe these are all tremors, warning of an approaching earthquake whose epicentre will be China.  Following the enormous interest in its new Research Note, it will look in more detail at China’s position over the next 3 days.