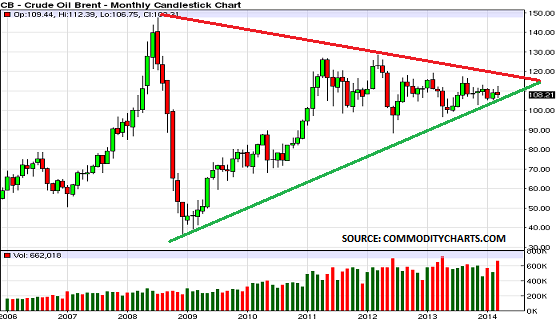 Whisper it quietly to your friends in the oil business.  But oil prices are looking very vulnerable.  Producers and the central banks have done a great job in creating the myth of imminent shortages – these have always been ‘just about to happen’ as a result of supply disruptions or the long-promised recovery in global growth.

But whilst the blog tips its hat to them for creativity and persistence, frankly the story is wearing a little thin.

The facts of the matter are that prices have hardly moved since the blog suggested last September that the bulls seemed to be running out of ideas to help keep prices at the $100/bbl level:

And the fundamental rule of purchasing is that when prices are not rising, they are on the way down.  No wonder the normally bullish analysts and traders in the investment banks have gone rather quiet.  They will face job cuts rather than bonuses if this calm continues.

Most likely, however, this is the calm before the storm.  The market has traced out, as the chart shows, probably the most extended triangle shape of all time.  And triangle shapes normally end with a bang, not a whimper.  Either the bears give up, and allow prices to rocket higher.  Or the reverse happens, and prices collapse.

Copper markets may provide a guide to what may happen next.  Nicknamed ‘Dr Copper’ for its ability to act as a leading indicator for the global economy:

There are many reasons for copper’s fall, and most of them also apply to oil.  Players have been happy to build inventory in the belief that prices would always recover.  Whilst central banks have maintained the flow of easy money at low interest rates.  In the absence of real growth, this money had to go into speculation instead.

Copper prices are now at their lowest levels for 4 years, and its decline has been followed by other metals including aluminium, lead, nickel and zinc.

So oil prices may be about to follow.  Certainly it seems one major support for them may be about to disappear.  As the blog noted last June, Brent has been a broken benchmark for many years.  It trades only 1mb/d, yet sets the price for 2/3rds of the market.

Of course, this has been very convenient for everyone involved.  But now the ICE futures exchange is starting to discuss adding more grades to the benchmark.  And Vitol CEO Ian Taylor has argued it should include oil from W Africa, Kazakhstan and Algeria, as well as Russia and the US.

The key to the short-term outlook is probably China.  The market still expects another stimulus package, and is holding on to its cargoes in hope.  But if the new leadership continues with its current policies, then in the absence of major global hostilities, prices probably have only one way to go.