Oil market hype fails to take prices out of their triangle 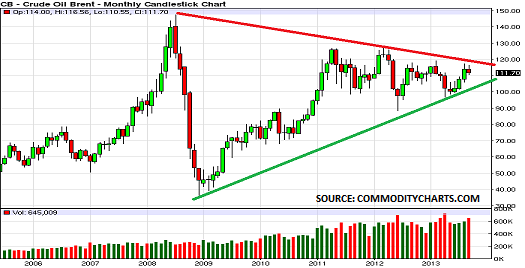 Pity for a moment those poor souls whose income depends on finding ever-more creative ways of justifying today’s record levels of oil prices.  One by one, all their favourite stories have disappeared.  Even the traditional summer warnings of record hurricane disruption have so far failed to deliver.

How different it is from the start of the crisis, when the bonuses were so much easier to earn:

Think of all those servers installed to carry the message around the world.  All those trees cut down to provide paper copies for senior management briefings.  All in vain.  The promised shortages and disruptions have simply refused to develop as forecast.

But invention is the mother of necessity.  Hats off then to those who managed to forecast shortages due to increasing oil and gas production in the USA.  Crisis!!! Crisis!!! screamed the headlines.  All this new production would swamp the Cushing terminal, and so Brent moved to a premium versus WTI.

Happy days, they were.

What about the problem that higher oil prices were doing their usual job of destroying demand?  No need to worry, thanks to the easy money policies of the central banks.  They would happily lend to anyone whose bank account was large enough to take $1bn or more of the new electronic money they were creating.

It might sound easy being the US Federal Reserve and having the job of quickly increasing your balance sheet from $900bn to $3.5tn.  But how many people are both able and willing to take such wads of cash at short notice, particularly today with global growth slowing?

Thank goodness for the hedge funds, you would say.  The QE3 stimulus might have failed to find enough borrowers if they hadn’t decided to boost their speculative long positions in oil futures to record levels this summer.

But where are we today?  Syria was supposed to take oil prices to record highs.  But somehow wiser counsels have prevailed.  Equally worrying for the oil price bulls are the new Iranian leadership, who want an end to the nuclear issue, and to increase oil production again.  Even worse, OPEC and Saudi Arabia insist that oil markets are “well supplied“.

Only the Russians remain loyal to the story.  Suddenly Urals blend is at record premia.  But are they really impartial observers?  They are not only major oil exporters, but gas exports are their largest source of revenue – and these are linked to oil prices.

We shouldn’t give up on the imaginative impulses of those whose living depends on spinning stories about oil market shortages.  They may well have another brainwave left.

But as the chart above reminds us, oil markets have traced out an enormous triangle shape.  And such triangles only end in one of two ways.  Either a real shortage appears, and prices sky-rocket.  Or reality finally dawns, and they collapse.

The blog declares an interest in this critical debate.  It now has a number of bets with its investment analyst friends based on prices falling to $50/bbl or less.  And it will be very happy to increase these, if any bullish readers would like to put their own money on the line.  Please just don’t all rush at once.

Latest benchmark price movements since January with ICIS pricing comments this week are below:
Benzene Europe, down 13%. ”Steady-to-weak spot pricing amid several downstream shutdowns, leading to a buildup of length for prompt volumes”
PTA China, down 10%. “Spot availability is abundant mainly because of slower buying activities from India…plus lower-than-expected demand from China and Taiwan amid a traditional peak season”
Naphtha Europe, flat 0%. “Poor margins and maintenance requirements mean refiners have been forced to cut production”
Brent crude oil, flat 0%.
HDPE USA export, up 9%. “Force majeure by LyondellBasell for its biggest plant in North America”
US$: yen, up 13%
S&P 500 stock market index, up 15%