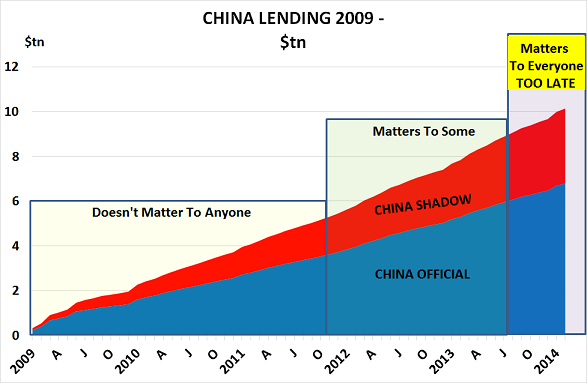 Suddenly, people are starting to talk about China and the risks it creates for the global economy.  There is a lifecycle to the way that such issues develop in the general consciousness, as John Mauldin has observed.  And so this development suggests that we are now well along the process, as highlighted in the chart above:

Today, however, this consensus is beginning to be broken.  Of course, many analysts still believe that another stimulus is inevitable and will solve any problems that might emerge.  But others ask the awkward question of how the current $10tn of total lending will ever be repaid.

China’s new leadership are amongst those asking the awkward questions.  Thus Premier Li Keqiang said last week that there will be defaults:

“It is indeed difficult to avoid a few default cases.  We must tighten monitoring to prevent regional and systemic financial risks.”

The problem is that nobody really knows how bad the situation has become.  Logic suggests that it is impossible to run proper credit checks when handing out $10tn in 5 years.  As Li went on to say:

“We decided to audit government debt last year, which showed our firm conviction to face the problem.”

Whilst the South China Morning Post summarised the position as follows:

“In the lending spree in the wake of the 2008-09 global financial meltdown, funds poured into local governments and state-owned enterprises, leading to redundant projects and overcapacity in steel, cement, shipbuilding and other industries.  Local government debt had swollen to Rmb17.9tn ($2.9tn) by the middle of last year, the National Audit Office said at the end of last year. This was nearly 70% more than at the end of 2010, and accounted for 31% of GDP last year.  Li said the debt level was “generally controllable”, but the rising trend should not be overlooked. Local debt would be included in budget management and local government financing vehicles would be regulated, he said.  The lending binge from both banks and the shadow banking system has increased China’s leverage. Fitch Ratings predicted its credit-to-GDP ratio at the end of 2017 would be close to 250%, compared with 130% in 2008.”

The fact that this type of analysis is now appearing on the main pages of major media confirms that the issue no longer just ‘Matters To Some’.  Another sign was the BBC’s documentary last month, ‘How China fooled the world’.

Local government debt equal to 31% of GDP last year, and up by 70% in 3 years, doesn’t sound good.  Nor does a near-doubling of debt to GDP ratios in 5 years.  If this wasn’t China, imagine what the press and policymakers would be saying, and the panic that would be taking place at these sudden revalations.

If Fitch is right, China’s debt is already now bigger than the entire US economy.

Another factor is that the government is now starting to depreciate the currency to protect exports, as we forecast in the recent Research Note.  In turn, China is now starting to see a reversal of the ‘hot money’ flows attracted since 2009 by the combination of “guaranteed” currency appreciation and sky-high shadow banking interest rates.

Equally alarming for these speculators is that the first default is now taking place in the real estate sector.   Real estate is now 16% of GDP on its own, before counting all the other industries such as consumer durables that benefited from its rise.  So this is China’s Bear Stearns moment, when its ‘wealth effect’ machine moves into reverse.

But most people haven’t yet begun to think in detail about the potential problems, or how these might impact them.  That is only now starting to happen as we move into Phase 3.  Quite suddenly, more and more people will begin to realise it ‘Matters To Everyone – Too Late’.

So far, commodity markets have remained calm, but clearly the pressures are growing as the blog discussed yesterday.  Equally, as the blog highlighted Monday, most policymakers continue to only focus on their own silo.  They have not started to consider how major defaults and a general economic slowdown in China would impact their rosy forecasts.