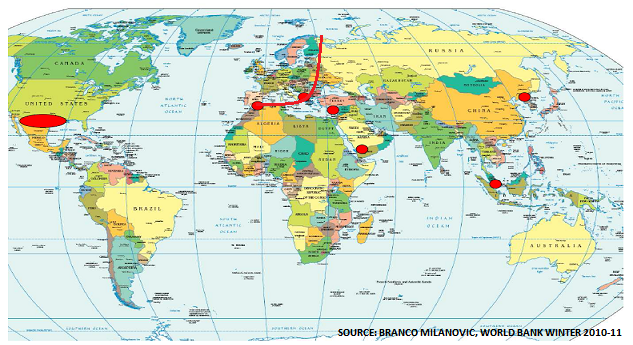 Markets have been remarkably calm ahead of Crimea’s planned Sunday referendum to leave Ukraine and join Russia.  Yet as Associated Press has reported:

“The Group of 7 world leaders say they won’t recognize results of a referendum for the Crimea region to split from Ukraine and join Russia.  A statement from the seven nations released from the White House on Wednesday calls on Russia “to cease all efforts to change the status of Crimea contrary to Ukrainian law and in violation of international law.” It says the referendum scheduled for this weekend “would have no legal effect” and the process is deeply flawed.

“The leaders said they would take further action, individually and collectively, if Russia tries to annex Crimea.  The statement was from the leaders of Canada, France, Germany, Italy, Japan, Britain and the United States, along with the European Council and the European Commission.”

This calmness is probably because markets have forgotten that geopolitics matter.  And as the old saying goes, “those who fail to learn from history, are doomed to repeat it”.

German Chancellor Angela Merkel used to live in East Germany, before German unification, and she hasn’t forgotten.  She warned the European Parliament of potential “catastrophe” yesterday:

“We would not only see it, also as neighbours of Russia, as a threat. And it would not only change the European Union’s relationship with Russia. No, this would also cause massive damage to Russia, economically and politically.”

The Ukraine/Crimea dispute is thus just a first sign of the growing distance between the Have’s and the Have-nots.  As the above slide from Branko Milanovic of the World Bank shows, there are 7 major global flashpoints today where this divide is already evident (red dots):

If we add a red line to Milanovic’s map to divide West and East Europe, we can easily see how his argument applies to the Crimea/Ukraine dispute:

Ukrainians and Crimeans might therefore easily see themselves in different camps:

“Russia today is dangerous. After Ukraine will be Moldova, and after Moldova will be different countries. They are trying to rewrite the borders after the Second World War in Europe.”

Today’s confrontations are probably only a taste of those to come.  Relationships between the West and Russia are now clearly set to worsen as Merkel warned.  Last week, for example, Russia’s President Putin claimed that Lithuania and Poland had helped to organise the unrest in the Ukraine.

In turn, it is likely that China will see today’s dispute as an opportunity to re-establish its former relationship with Russia.  Its ambassador to Germany warned Wednesday:

“We don’t see any point in sanctions.   Sanctions could lead to retaliatory action, and that would trigger a spiral with unforeseeable consequences. We don’t want this.”

We can have no idea of how the various strands will play out.  But one thing is very clear.  Many companies will suddenly wake up in shock one morning, having realised too late that their prized foreign plant is now on the ‘wrong side’ of the growing geopolitical divide.

Its pre-election time in India, as the world’s largest democracy prepares ...

Surprise! Economists suddenly wake up to reality about China

“Forget the Crimea annexation or a U.S.-Russia standoff. The biggest inter...