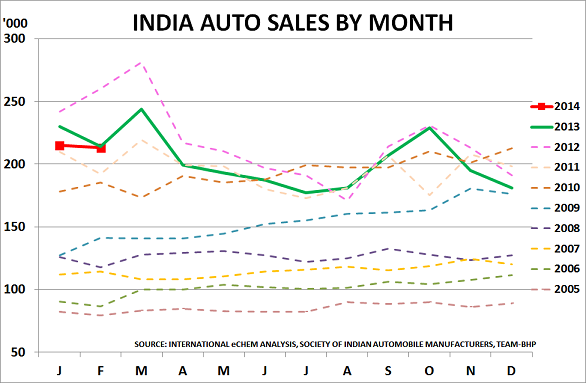 Its pre-election time in India, as the world’s largest democracy prepares to go to the polls next month.  And so auto sales are receiving special attention from the politicians in advance of the vote.

Thus the Finance Minister cut taxes last month on all models, to 8% from 12% for small cars, 2-wheelers and commercial vehicles; to 20% from 24% for mid-sized cars; and to 24% for large cars and SUVs from 27% and 30% respectively.  But as the chart above of monthly sales shows, buyers didn’t rush to showrooms to celebrate:

But of course March is always the strongest month for sales, and the government’s timing was clearly aimed at developing a feel-good factor then in advance of the election itself.

Detailed data from analysts BHP shows that the main effect of the tax cut was in the sedan and MPV segments.  Honda in particular did well, jumping to 4th in the manufacturers’ league table from 8th last year.  Its City sedan model outsold the combined sales of its competitors, as it focused on moving volume from its new Rajasthan plant.

Ford’s EcoSport sales were also strong, with an order backlog building as it began sales into export markets.

But the key issue remains what will happen after the election.  Auto sales fell last year for the first time in a decade.   And with economic growth slowing, it may be sometime before 2010’s ‘Incredible India’ advertising campaign resurfaces.

Markets have been remarkably calm ahead of Crimea’s planned Sunday referen...